Should we in U.S. fear MERS? 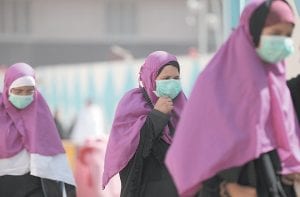 A respiratory virus that has sickened hundreds in the Middle East has spread for the first time from one person to another in the United States. The case has raised questions about how much contact is needed to transmit the germ.

Middle East respiratory syndrome, or MERS, has mostly spread before to health care workers or family members caring for a sick patient. The two men in the U.S. were together only in two business meetings.

But health officials say they don’t find it alarming and that the risk of MERS to the general public remains low.

Q: How many people have gotten sick in the U.S.?

A: Two cases of MERS have been confirmed in travelers who came to the United States from Saudi Arabia, which has been at the center of the outbreak. The first was an American doctor, in his 60s, who lives and works in the capital Riyadh. Within days of arriving in Munster, Indiana, he was diagnosed with MERS and hospitalized. Officials have been testing anyone he was in close contact with after his arrival in late April.

Q: Did he spread MERS to anyone?

A: Yes, to a business associate, who didn’t come down with MERS. The Illinois man probably picked up the virus during a 40-minute meeting the day after the doctor arrived; they met again the next day. He briefly had cold-like symptoms but that could have been from a cold or allergy. So far, health officials say tests have been negative for six family members and 53 health care workers.

A: If the Illinois man was infected, why didn’t he get sick?

Q: Not everyone who gets the virus gets sick. An early test didn’t detect the germ but a later blood test showed he had developed antibodies to fight an infection at some point. The man was reported to be feeling well, the Centers for Disease Control and Prevention said. The doctor who spread the virus has fully recovered. It’s not known how he was infected but he worked in a hospital that treated MERS.

Q: How infectious is it?

A: It is not considered highly infectious. MERS does not spread as easily as the flu or some other diseases. Officials aren’t sure how it is transmitted, but it is thought to be spread through sneezing and coughing. While the U.S. encounter may seem too casual, investigators say the Indiana doctor was feverish and not feeling well during the 40-minute meeting, in which they sat about 6 feet apart. “It doesn’t change our interpretation of who can get MERS from other people,” said the CDC’s Dr. David Swerdlow.

Q: Where did the MERS virus come from?

A: Some scientists think the virus that causes MERS first spread to humans from camels, but research is ongoing to confirm its origins. The virus causes a respiratory illness that begins with flu- like fever and cough but can lead to shortness of breath, pneumonia and death. Since MERS first appeared two years ago, about 600 illnesses have been reported, including more than 170 deaths, most in Saudi Arabia.

Q: What about the second traveler sick with MERS?

A: The 44-year-old resident of Saudi Arabia has been discharged from an Orlando hospital, Florida officials said last week. The man — also a doctor — fell ill while visiting Florida. All health care workers and family members with whom he had contact so far have tested negative.