Shoveling snow can be hard on the heart 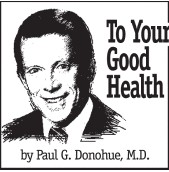 DEAR DR. DONOHUE: My husband is 73. I am sure he’s going to die this winter. He insists on shoveling our snow, and we have lots of it. He says it’s good for him; it gives him exercise. This from a man whose other exercise consists of popping open a beer can. He comes in after he’s cleared the walk, puffing and exhausted. Please talk some sense into him. — M.L.

ANSWER: After every snowstorm, city emergency rooms fill with older men who have had a heart attack after cleaning their snow-covered walks. Snow shoveling is strenuous exercise. It burns 420 calories an hour. The heart rate of a shoveler rises to 170 beats a minute, and the systolic blood pressure (the first number of a reading) exceeds 200. Of course, the demand depends on the depth and weight of the snow. Older hearts cannot support such stress.

In addition to the work of shoveling, cold weather adds more demands on the heart.

Unless a man your husband’s age has had medical clearance for such exhausting exercise, he is tempting fate.

DEAR DR. DONOHUE: A friend has a case of constant hiccups. Can you suggest any possible cures? — P.W.

ANSWER: Hiccups come from involuntary contractions of the diaphragm, the horizontal muscle sheet that lies between the chest and the abdomen. It is the principal breathing muscle. Sometimes persistent contractions can be traced to gallbladder problems, diseases of the pancreas, reflux of stomach acid into the esophagus (heartburn) or an abscess on the abdominal side of the diaphragm. However, most of the time, no cause is found. For temporary hiccups, gulping food and simultaneously swallowing air sometimes brings them on. So can carbonated beverages.

Through the years readers have provided me with hundreds of home remedies for dealing with hiccups, and I welcome new additions. Swallowing a teaspoon of sugar irritates the throat, which sets in motion a reflex that can end hiccups. Breathing into a paper bag raises the blood carbon-dioxide level, which, in turn, raises blood acidity, and that triggers a release of calcium. Calcium can spark nerve signals to stop hiccups. Putting angostura bitters on the back of the tongue is another sometimes-successful trick.

Hiccups that last longer than 48 hours aren’t likely to respond to home remedies. Medicines have to be turned to. Chlorpromazine, omeprazole, metoclopramide and baclofen are often successfully used.

In cases that are resistant to medicine treatment and that are disrupting a person’s life, doctors can interrupt, in a number of ways, the transmission of nerve signals conducted to the diaphragm by the phrenic nerve.

DEAR DR. DONOHUE: am 34 and have been jogging for 10 years. I do it year-round. I’ve noticed this winter that my knees feel stiff before I run. They don’t hurt during the run or after. Could this be a sign that I’m getting arthritis? — B.C.