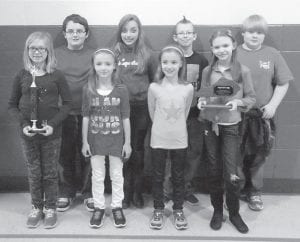 Oh how wonderful that sounds to my ears and to see written with my hazel eyes. My lilac trees have been starting to form buds for almost two weeks now, and the maple tree has starting showing the beginning of leaves.

Crocus are blooming, some tulips are ready to burst open, and the daffodils are almost ready too.

Since the weather is fi- nally warm enough, Friday night Daphne Korner and I went to Connersville Bluegrass to see Ma Crow & The Lady Slippers. This is the first time I’ve seen this wonderful group for quite a while.

I missed seeing Hayward Day and his beautiful daughter Kim. I looked for Hayward’s phone number and couldn’t find it.

There have been changes made to the band as Collie Jr. Calihan isn’t picking with the house band, Briar Hoppers. Wes Miller is playing the guitar, and they also have a new fiddler player, who is very good.

Ray Brandenberg will be missed, so will his wife Helen.

Marvin Davis plays mandolin. Marvin is a great musician who can play anything. He and the new fiddle player did a couple of twin fiddle tunes.

Gary has a unique way of playing that small instrument; everyone is so thrilled with his good, solid picking.

There was so much going on, even in my beloved mountains I call home. Sunrise Ridge was performing, and I love that band too.

A friend and I went to an event called ‘Itchin’ to Pick,’ which is held every year at the Galt House in Louisville.

Oh this trip was wonderful, and on the way there, several yards had daffodils in full bloom. Oh that was so good to see for both of us.

A true sign that spring is here, although it is predicted to snow this week, plus I have seen it snow when forsythia, daffodils and tulips were in full bloom. It was a beautiful sight for our eyes to behold.

Just before we got to the event, the Belle of Louisville was in port, and once again I was in for a special treat. For years the old paddlewheels have been a passion of mine, and the only thing I regret is there wasn’t enough time to squeeze a few minutes to get close, plus I forgot my camera.

I know my friend likes seafood, and we passed a place called Joe’s Crab Shack. I would have treated them for lunch and I am sure they would have enjoyed it had there been enough time, for being kind enough to let me ride along, since I have never been to Louisville.

When we arrived there were’t very many musicians in the lobby picking, then to my surprise in walked a musician I have known for several years. I really don’t know who was more surprised Ron or me with seeing each other. Ron Simmons is in charge of Appalachian Festival, which is held each year on Mother’s Day at Old Coney.

Just a few minutes later, another musician friend came, then a few more.

Now you have to realize I am not a musician, but these musicians they know I support bluegrass music and know I will kick my shoes off and dance.

It was wonderful to listen and to watch, and of course I never see strangers when I am really in a room of strangers.

We came back from Louisville on a different route, and once again it was a delightful trip for me. I am used to being the one driving.

Since we came home rather early, somehow my car just seemed to keep on going instead of coming home. I went to Fairborn to see Ma Crow & the Lady Slippers, and it was a total surprise to everyone when I walked in.

There was one disappointment as my dancing partner Howard was sick and not able to be there. Howard will be 90 years old in May, and I am afraid his health is starting to fail a little.

I have been cooped up almost two months, so I think I tried to make up for it in one day.

Belated happy anniversary wishes to Mike and Valerie Ison, the parents of my two special young readers of The Mountain Eagle, James and John Ison.

Monday night, Tony Hale & the Black Water Bluegrass Band will be at Hunters Pizzeria. If weather permits I may go. There’s an extra bonus, I would get to see Les and Pat Wagner, plus Larry and Becky Hasty, along with Polly and Kelly.

I was sorry to hear that Delores Calihan Fields died. Delores and Mommy were best friends when I was a child. Oak and Delores were actually close friends until they moved to Indiana. In fact I took Mommy and Daddy to visit them years ago in Lawrenceburg.

I apologize to Doyle Ison who celebrated a birthday Feb. 12. Since I had such a difficult month I think part of my brain has been affected.

Before I forget, happy birthday to Betty Ison, April 8, and my sister-inlaw Wanda Hall, April 5. It’s better to be a little early than forget.

I am sorry to hear of so much sickness every place you turn.

Hello to my brother Jerry and Mattie Hall. Jerry is doing some better.

This computer is acting up again, and I am going to get a new one as I am tired of asking for help and I don’t want to put any more money in this one.

When the Amvets come by to pick up donations, there are going to be several items such a VCR that someone may be able to fix. I am tired of things sitting around that I can’t use