Show to celebrate ‘Songs of Coal’ 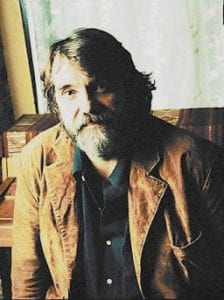 London, Ky., native Darrell Scott and his father Wayne will be the featured performers at a historic concert on Sunday, September 23, at the renowned Carter Fold in Hiltons, Virginia. Presented by the Lonesome Pine Office on Youth, this event will celebrate the official release of the much-anticipated “Music of Coal: Mining Songs from the Appalachian Coalfields” CD set.

Darrel Scott, who now writes and performs in Nashville, is a highly-respected and multi-talented musician whose songs have been recorded by the Dixie Chicks (“Long Time Gone” and “Heartbreak Town”), Travis Tritt (“A Great Day To Be Alive”), Garth Brooks (“When No One’s Around”), and Sara Evans (“Family Tree”).. His song “Never Leave Harlan Alive,” which was made into a hit by Patty Loveless and Brad Paisley, has become one of today’s most performed songs. Scott’s album, Theatre of the Unheard, was picked as the seventh-best album of 2003 by the critics of Rolling Stone magazine.

“Scott is one of those so-talented you-want-to-smack-him guys! He’s among our town’s best singers, best songwriters, and best instrumentalists,” writes the Tennessean newspaper in Nashville.

The concert will also feature Darrel’s father, Wayne, whom Darrel credits for his great patience as a single dad raising three sons and for his early musical training. Somehow Wayne always found money and time to set out on occasional weekends for Nashville and the “Grand Ol’Opry.” There is also a story about young Darrel asking to borrow his dad’s Gibson Hummingbird guitar and taking it to a pond below the house to see if it would float. Wayne just shrugged it off saying, “At least he has a curiosity.”

Darrel Scott’s respect for coal miners and their families was demonstrated when he gave “Never Leave Harlan Alive” to the Lonesome Pine Office on Youth to use on the “Music of Coal” CD free of charge, and by his willingness to add one more date onto an already too-busy schedule to kick off the official release of “Music of Coal.”

“Music of Coal” was produced by the Lonesome Pine Office on Youth’s Lonesome Records, a non-profit, special project label focusing on Appalachian life and culture. Young people participating in LPOY programs learn about producing both music and books through this project and other projects to follow.

Recorded and mastered at the respected Maggard Sound Studio in Big Stone Gap, Va, “Music of Coal” features songs dating back to 1900 with the Thomas A. Edison Orchestra’s “Down in a Coal Mine,” as well as music that is as cutting-edge, fresh,and new as Foddershock’s “Dyin’ To Make A Livin’.”

Country music legend Tom T. Hall wrote and sings a brand new song, “I’m A Coal Mining Man,” for this CD. In fact, nearly half the songs on the second CD are new. Ralph Stanley and Dwight Yoakum team up for unforgettable harmonies, and CD Two ends with Natalie Merchant’s powerful new interpretation of Florence Reese’s labor anthem, “Which Side Are You On?”, reminding us of the lasting power of song. Merchant was so moved by the music and book that she returned her performance rights check to help fund the next recording project by the Lonesome Pine Office on Youth..

The Songs of Coal Concert begins at 3 p.m. Sunday, September 23, on the stage of the Carter Fold, located down the A.P. Carter Highway near Hiltons, Va. The first half of the evening will feature regional artists who recorded songs for the two-CD set. Veteran performers Dale Jett, Dorothy Myles, Ron Short, and Jack Wright will share the stage with 14-year-old Molly Slemp, who will perform a Jean Ritchie song, “West Virginia Mine Disaster.” Even though it was written many years ago, Ritchie’s song is as timely and potent as today’s headlines.

Nashville singer/songwriter, Suzanne Mumpower-Johnson, born in Appalachia, Va., will sing her powerfully drawn yet gentle portrait of a miner’s family entitled, “Coal Dust Kisses”. Other artists are being added as the date draws near. Smithsonian folklorist Joe Wilson, author of The Guide to the Crooked Road, will serve as emcee for the concert. Darrel Scott will take the stage around 5 p.m. He and his father will finish out the concert.

Advance tickets will be available in Letcher County at Appalshop in Whitesburg. Tickets are also available at Dad’s CD’s in Wise, Va., and at the Lonesome Pine Office on Youth in Big Stone Gap.

Tickets are $15, if purchased before the concert date, and $18 at the door. Children under seven years of age will be admitted free. For more information call the Lonesome Pine Office on Youth, (276) 523-5064, ext. 10