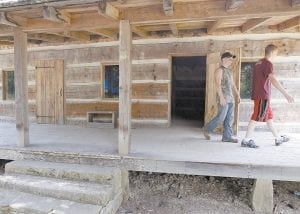 Jordan Stamper, right, and James Ball looked over a cabin that marks the site of key events in the Hatfield- McCoy feud. Artifacts unearthed last year appear to pinpoint the location of an 1888 ambush on Randolph McCoy’s cabin by the Hatfield clan in the woods of eastern Kentucky. Excavators found bullets believed to have been fired by the McCoys in self-defense. The finding wasn’t announced until this week. (AP Photo)

The Hatfield clan New Year’s attack on Randolph McCoy’s cabin marked a turning point in America’s most famous feud — the homestead was set ablaze, and two McCoys were gunned down. Hatfield family members and supporters were soon thrown in jail.

Artifacts recently unearthed appear to pinpoint the location of the 1888 ambush in the woods of Pike County in eastern Kentucky. Excavators found bullets believed to have been fired by the McCoys in self-defense, along with fragments of windows and ceramic from the family’s cabin.

The artifacts were found last year by a team working with the National Geographic Channel series “Diggers,” and confirmed by Kim McBride, co-director of the Kentucky Archaeological Survey (jointly administered by the University of Kentucky Department of Anthropology and the Kentucky Heritage Council).

This site, located on private property in the community of Hardy, had long been speculated to be the McCoy’s land and the site of the final family feud. Remains of the cabin where the family lived and artifacts from the site where the most famous feud in American history went down, however, had never been uncovered.

“Diggers” premiered on the National Geographic Channel on Tuesday. The episode detailing the McCoy homestead discovery airs on Tuesday, January 29 at 10 p.m.

“This is one of the most famous conflicts in American history, and we’ve got bullets fired from one of the key battles. It doesn’t get any better than that,” said Bill Richardson, a West Virginia University extension professor who was part of the recent discovery.

The property is owned by Bob Scott, a Hatfield descendant who has suspected for years that the hilly land was the site of the brutal attack. He grew up listening to stories from his parents and grandparents about the 19thcentury feud.

“My father told me years ago that someday this well would talk,” Scott said, referring to the well on the site where Randolph McCoy’s daughter Alafair died while trying to flee the attackers.

Now backed by the discovery, Scott plans to capitalize on the historic 70-acre site near the West Virginia line. The options include a housing development featuring horseback and ATV trails, he said.

Scott’s home is about 75 yards from where the cabin stood. The McCoys moved to nearby Pikeville after the homestead was burned.

The bullets were discovered burrowed several inches into a hillside overlooking where the Mc- Coy cabin stood, Richardson said. Three different calibers of bullets, including shotgun pellets, were uncovered.

The ammunition, found in an area about 30 feet wide, was traced to the same time period as the 1888 battle, Richardson said.

Also found during the initial search was a piece of charred wood with a nail traced to the Mc- Coy cabin’s time period, he said.

Later, an archaeological team led by McBride, confirmed the location of the McCoy cabin. They found tiny pieces of window glass and ceramics traced to the same period, along with more nails and charred wood.

She would like to return to the site for more excavation work, which could take three to five weeks.

There were other clues connecting the property to the Mc- Coys. The deed to the property was traced back to Randolph McCoy, she said.

“It was kind of a coming together of all the pieces of evidence,” McBride said.

The discoveries come amid a surge of interest in the feud that spanned much of the last half of the 19th century. The fighting claimed at least a dozen lives by 1888 and catapulted both families into the American vernacular, becoming shorthand to describe bitter rivalries.

The New Year’s attack was one of the bloodiest episodes in the feud.

“It was a turning point,” Richardson said. “The feud had lasted 23 years up until this battle. And then 20 days later it’s virtually over.”

Scott counts descendants from both families, who no longer feud, as friends.

“It’s very unique to stand here on New Year’s Eve and realize what happened,” he said. “It’s sad that that occurred, but that was a way of life.”