‘Showpiece restaurant’ will open soon in City of Jenkins; will be first to sell alcohol 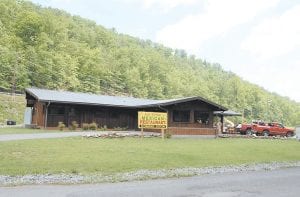 The photo above shows the outside of Las Peñas Mexican Restaurant, which is still under construction on city-owned propery in Jenkins. The restaurant will “be a showpiece for Letcher County” when it is completed, says owner and manager Charles Colwell.

Three inspections are scheduled for today (Wednesday) and Thursday. If electrical, plumbing and hood inspections are successful, Colwell said the restaurant could be open for business in a few weeks.

“You want to make sure everything is to code,” said Colwell. “We’re going to have a fine place here once we do open.”

The menu will be the same as Las Peñas in Whitesburg, which can seat 340 customers.

“I have a successful restaurant in Whitesburg,” said Colwell. “This one is going to add to it and make it stronger.”

He said the Jenkins restaurant will seat 115 customers.

After Colwell obtains an occupancy license, he will apply with Alcoholic Beverage Control (ABC) for a limited restaurant license, which requires mixed drinks, beer and wine to be served at a table by a member of the wait staff. 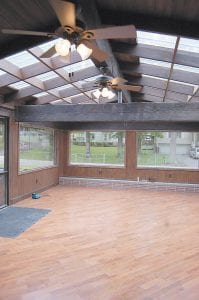 The picture at right gives an idea about how the interior of the restaurant will appear when it opens soon.

The Jenkins site of Las Peñas is located on Lakeside in a renovated house built by Bert Fields, former owner of Kentucky Water Company. Fields disassembled old water tanks and used the California redwood as ceiling beams in his house.

“He built that house by himself,” said Jenkins Mayor G.C. Kincer. “He lifted the logs. He did it all.”

The house has recently been renovated into space for the restaurant. The carport has been transformed into an extra dining room, which matches the existing interior. With the additional area, the restaurant occupies 3,380 square feet, which also includes a large kitchen, a serving area and a business office.

Kincer said the integrity of the building has been left intact during recent renovations. Red brick, dark wood, hardwood floors and a fireplace make up the main dining area.

“People are going to be surprised,” said Colwell. “This is going to be one of the nicest restaurants, I think, in eastern Kentucky. Once we get the floors clean and shining, it is going to be a showpiece for Letcher County.”

The City of Jenkins bought the house and the land around it a few years ago to build a zero-entry swimming pool, which opened last September.

Kincer said he and the city council envisioned having a recreational complex with the pool, a restaurant and an events center.

“He had been onto me for three long years to put a restaurant in Jenkins,” said Colwell. “This is his vision he has had since he has been mayor.”

Kincer said he wanted the City of Jenkins to form a partnership with Colwell because “he is a topnotch businessman.”

“The council was all for it,” said Kincer.

After researching to see if opening a restaurant in Jenkins was viable, Colwell entered into a lease with the City of Jenkins.

“It’s a good investment for both of us,” said Colwell.

Kincer said Jenkins residents are eager for the restaurant to open.

“They are excited about this,” said Kincer. “ They can’t stand it. Every other call to City Hall is ‘When is it going to open?’”