‘Shrek the Third’ is a typical tale 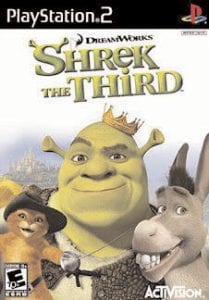 Sometimes expectations are everything. Witness “Shrek the Third.” Those who played and enjoyed “Shrek 2” should be content with “Shrek the Third,” which carries on the series’ tradition of producing marginally fun games that are neither lousy nor particularly special.

Overwhelmingly, “Third” is a brawling game – a buttonmasher’s paradise that unleashes a barrage of enemies to whomp.

Six characters – Shrek, Fiona, Donkey, Prince Arthur, Sleeping Beauty and Puss in Boots – stand at your command, but their capabilities are much more similar than different. Even Sleeping Beauty knows how to rumble, which is ridiculous but entertaining.

Although there are a few puzzles, you can blow through most of “Third’s” brief adventure by leaning on the attack buttons.

And therein lies the $40-$50 problem. Kids and ultra-casual players may come back for seconds and (ahem) thirds, but seasoned

players will have more trouble conquering their buyer’s remorse. It’s fun, but only for so long.

“Third’s” other big problem, ironically, is its animation. The ingame animation is

for a game that’s based on an animated feature.