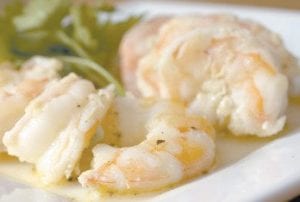 The shrimp and garlic are the stars of this dish, so don’t serve it with anything that will compete with those flavors. A simple heap of white rice should do nicely.

In a large skillet over medium, heat the olive oil until fragrant. Add the shrimp and garlic and saute until the shrimp starts to turn pink, about 4 to 5 minutes. Use tongs to turn the shrimp once during cooking.

Reduce the heat to low, then add the wine, salt, oregano and cumin. Cook extra 4 to 5 minutes.

Use tongs to transfer the shrimp to serving bowls, then pour the sauce over the shrimp. Garnish with parsley.