Brittany, 16, and Robbie Bergquist, 15, are eyeing your old cell phone.

Three years ago, the brother and sister team from Norwell, Mass., created a program called Cell Phones for Soldiers. They collected used cell phones, sold them to a recycling company and used the proceeds to buy prepaid calling cards for U.S. troops serving

in Afghanistan, Kuwait and Iraq, Our goal was simple – to help our soldiers call home,” Brittany told Time For Kids. “We thought this would give people an easy way to support the troops as well.” Their plan worked. Brittany and Robbie collected more than 50,000 used cell phones and raised $150,000 in a year.

This spring, the teens went nationwide. They joined forces with AT&T to bring even more soldiers and their families together. AT&T has donated 30,000 cards valued at almost $300,000 to Cell Phones for Soldiers. In addition, all 1,800 AT&T Wireless stores across the country will now serve as drop-off sites for anyone who wants to donate an old cell phone. 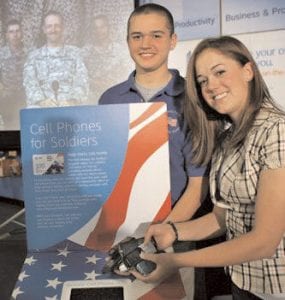 Brittany and Robbie Bergquist have teamed up with AT&T to provide prepaid calling cards for U.S. troops serving in Kuwait, Afghanistan and Iraq.

“We believe all men and women serving overseas should have the ability to call home. We have learned a lot from these two teenagers,” says Steve Hodges, Northeast regional president of AT&T Wireless.

The company got on board after Brittany sent AT&T spokesperson Susan Bean an e-mail asking for help.

“I know that you are a big company and probably get requests for help all the time, but our troops really need us to help them right now more than ever,” Brittany wrote. A few days after receiving the message, Bean replied and agreed to help. Brittany was thrilled. “It was absolutely incredible,” Brittany says. “I ran around the whole house three times!”

“With this endorsement from AT&T our program can become a lot bigger than it already is,” Robbie says.

Since the program started in 2004, Brittany and Robbie have raised more than $1 million dollars and sent more than 75,000 calling cards to men and women in the armed forces. Now the siblings have a new goal. 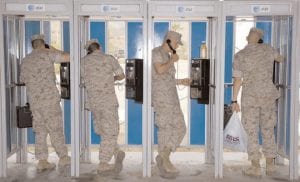 “We want to be able to put a phone card in the hand of every soldier serving overseas,” Brittany says. “To do this we would need to raise $700,000 a month. With the help of AT&T, it is now possible.”

Brittany and Robbie hope to collect 50,000 phones by July 4. To find out how you can help, go to