Siblings win award at Glow on the Pond fundraiser 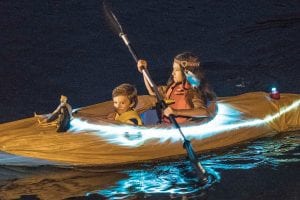 Levi Little enjoys a float as his sister, Maggie Little, paddles across Fishpond Lake last Saturday during the fourth annual Glow on the Pond event. The kids were the winners for the best decorated boat for their Pocahontas and John Smith-themed kayak. Dozens of people lined the banks at the lake’s dam to watch the parade of kayaks decorated with lights and other items. The event is a fundraiser for the Mountain Heritage Festival, which is held at the end of September in Whitesburg. (Photo by Chris Anderson)