Sides dispute what happened in arrest 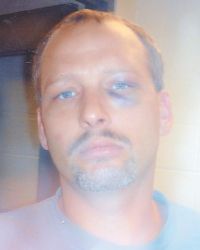 This photo taken through a Plexiglass window at the Letcher County Jail shows Chad Cupps with a blackened eye. Police say they aren’t responsible for the injury.

A 37-year-old Letcher County man was charged with evading police, resisting arrest and criminal mischief after his July 18 arrest in connection with felony indictments returned against him nearly a year ago.

Chad Cupps, of Jeremiah, is being held without bond in the Letcher County Jail. Police say he ran from them when they attempted to arrest him on theft-related indictment warrants issued last August.

Cupps’s mother says police beat her son during the arrest, a charge which police deny.

Police say they charged Cupps with second-degree fleeing or evading and resisting arrest after he ran into the woods when he saw them arrive at a home he was visiting. They say a charge of third-degree criminal mischief was added after a sheriff ‘s deputy tore a zipper on his boots while chasing Cupps through the woods.

Cupps, of Jeremiah, was arrested at 9:49 p.m. on Saturday after police were told he was visiting a home located on KY 7 North, about two miles from Isom. Cupps had been wanted on warrants issued after he was indicted on theft-related charges last August.

Cupps was taken to the Whitesburg hospital on Monday, where he was examined for injuries he said he suffered when police hit him during the arrest. Letcher County Jailer Donald McCall said Cupps was returned to the jail after doctors gave medical clearance.

Cupps’s mother, Lois Breeding, also of Jeremiah, said her son suffered facial injuries, including a blackened eye, after police hit him with a flashlight.

“He said, ‘I give up, don’t beat me’ and they beat him in the face,” Mrs. Breeding said, adding that authorities “refused to take him to the doctor” after he arrived at the jail.

Sgt. Brian Damron of the Letcher County Sheriff ‘s Department said witnesses interviewed at the scene told authorities Cupps was not beaten during the arrest. Damron also said Cupps had no visible marks when he got to the jail, but that photos were taken because Cupps had charged he was beaten. He said the photos were filed with an incident report.

Mrs. Breeding visited Cupps at the jail on Sunday and left with photos that show Cupps with a blackened eye.

“I don’t think any mother’s child should be treated this way,” said Mrs.

(Continued from Page 2) Breeding. “I think people out there need to know that is no way to treat a human being.”

“People allege things to either get monetary gains or to attempt to get the charges dismissed,” Damron said of the charges being leveled by Cupps and Mrs. Breeding. “This is another example of someone trying to manipulate a situation to try to get something out of it.”

“We were attempting to serve a warrant on (Cupps) when (he) saw us coming up the driveway he began to run from the back door,” Bates wrote in a police citation. “I repeated, ‘Stop running, police,’ but (Cupps) continued to run. (He) ran in the woods and fell as he was attempting to get to his feet and run. I tackled (Cupps) to the ground. As we were both on the ground I attempted to get his hands which he kept pulling away from me. Finally I got (Cupps) cuffed.”

Bates also wrote that the zipper on his police boots was torn during the pursuit. He said the boots cost $110.