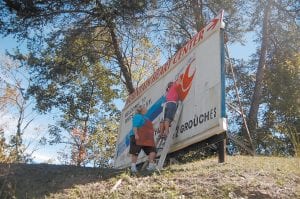 SIGN GETS A TOUCH-UP — Laura Whitaker, owner of Laura’s Lettering, held onto a ladder while her youngest daughter, Savanna Whitaker-Smith, touched up the top of the Royal Crown Cola logo with some red paint last week. The duo finished cleaning and painting the 50-year-old billboard before Bradley Bentley’s 95th birthday party, which was held Sept. 11 at the RC Plant in Whitesburg. Bentley, owner of the plant, came up with the idea of the billboard in 1960. The sign says, “Welcome to Whitesburg, Ky. Population 1,534 friendly people plus two grouches.” It remains a mystery as who the two grouches are and Bradley Bentley’s son, Ronald Bentley, said the sign wasn’t meant to describe anyone in particular.