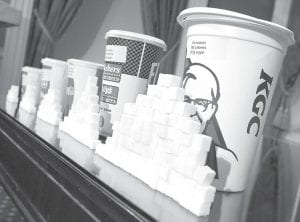 Telling people how much sugar is in their soft drink isn’t effective, but letting them know how much exercise it would take to get rid of the sugar does the trick, a recent study at Johns Hopkins University has found. (AP Photo)

Most Americans don’t adjust their bad eating habits after reading nutrition labels, but when they are provided information that is easy to understand, like connecting the amount of exercise needed to burn a certain number of calories, many do make healthier choices, according to a recent study from Johns Hopkins University’s Bloomberg School of Public Health.

“People don’t really understand what it means to say a typical soda has 250 calories,” Sara N. Bleich, lead author of the study, said in a release. “If you’re going to give people calorie information, there’s probably a better way to do it.”

Bleich, associate professor in the Department of Health Policy and Management at the Bloomberg School, explained that the research findings, printed online in the American Journal of Public Health, found that when you explain calories in an easily understandable way, you can encourage behavior change.

The study found that teens who saw printed signs explaining the number of miles they would need to walk to burn off the calories in a sugary drink were more likely to leave the store with a lower calorie beverage, a healthier beverage or a smaller size beverage. And these healthier choices persisted after the signs came down.

These findings could be important to chain restaurants next year when they will be required to display calorie counts on their menus, a requirement of the Patient Protection and Affordable

Care Act. Researchers say in the release that “policymakers may need to rethink how that information is communicated.”

The research involved posting one of four signs with easy to understand nutritional information at six different corner stores in African-American neighborhoods in Baltimore.

The signs focused on sodas, a commonly purchased item among teens. The signs pointed out that a 20 oz. bottle of soda, sports drink or fruit juice contained 250 calories, or had 16 teaspoons of sugar, or would take 50 minutes of running to work off those calories or would take five miles to walk the calories off.

The research found that when teens saw any of the four signs, they were more likely to choose a drink with fewer calories. The most effective sign was the one that told shoppers they would have to walk five miles to burn off the drink calories, Bleich said in the release.

“This is a very low-cost way to get children old enough to make their own purchases to drink fewer sugar-sweetened beverages and they appear to be effective even after they are removed,” Bleich says. “Black adolescents are one of the groups at highest risk for obesity and one of the largest consumers of sugary beverages. And there is a strong scientific link between consumption of sugary beverages and obesity. Using these easyto understand and easyto install signs may help promote obesity prevention or weight loss.”

This simple solution could also be applied in Kentucky where 18 percent of Kentucky’s high school students are obese, according to the 2013 Kentucky Youth Risk Behavior Survey, in which15 percent of them reported drinking a can, bottle, or glass of soda three or more times per day during the seven days before the survey.