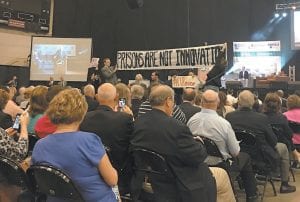 — A small group of citizens representing an organization called the Letcher County Governance Project staged a short protest against a planned federal prison slated for construction at Roxana during the SOAR meeting. The committee is supported by the Kentuckians for the Commonwealth (KFTC).