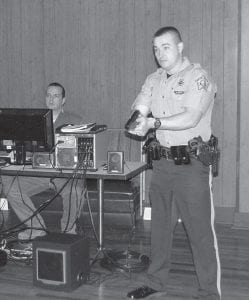 Letcher County Sheriff ‘s Deputy Jason Bates reacts to a recorded scenario being projected onto a large screen as part of a computerized training system. The simulations allow police officers to practice their decision-making skills when facing incidents such as a traffic stop, school shooting, bank robbery or a hostage situation.

Local police are learning how to react in real-life situations with the help of a computerized training system which lets officers practice making decisions.

The MILO by IES training system looks like an oversized video game and includes about 200 different scenarios ranging from a domestic violence dispute to a bank robbery. Police officers react to what the taped actors do on footage shown on a overhead projector. Depending on how well the officer is responding a moderator can change the outcome of the situation to end well or not so well.

“They’re beneficial in the fact that they allow officers to have realistic training in lethal force,” said Sgt. Brian Damron of the Letcher County Sheriff ‘s Department. “Hopefully mistakes in the training would prevent mistakes in real life.”

The system also can be used to simulate target practice.

“Every shot fired on the simulator saves the department money rather than having to buy ignition and gives the officers a lot more training time,” said Sheriff ‘s Deputy Mike Dingus.

Jenkins Police Chief Jim Stephens said the training gives officers “that little extra edge” by allowing them to have experienced a possible life or death scenario on a simulator before being faced with a similar situation in real life.

“It makes things go better for officers in real-life situations,” said Stephens. “You react in situations in how you have been trained. You learn real quick that shooting bull’seyes is a lot different than shooting a moving target.”

“We felt like that was important for so many domestic violence situations we work and all the other scenarios we get into,” said Letcher County Sheriff Danny Webb.