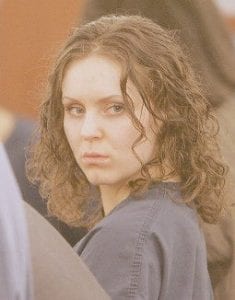 This photo shows Monique Maestas in Clark County District Court in Las Vegas on Oct. 5, 2006, prior to her sentencing. (AP Photo/REVIEWJOURNAL)

This is reality television.

Beau Maestas plunged a 12- inch butcher knife into two helpless children after a drug sale dispute with the girls’ mother. The 3-year-old was killed inside the blood-spattered family trailer; her 10-year-old sister was paralyzed when the blade severed her spinal cord.

Maestas sits on trial for his life.

Another example: Tonya Sue Baker sits in a lawyer’s office, unable to fathom why her surrogate son would rather take a lethal injection than snitch on his fellow gang members in the slaying of a 9-year-old girl caught in a crossfire.

“What’s this honor (expletive)?” she asks. “Ain’t no honor in getting a death penalty for somebody else.”

It’s all real, often too real, and sometimes surreal. And it’s another triumph for producers Denis Poncet and Jean-Xavier De Lestrade, owners of a 2005 Peabody Award for the eight-part Sundance Channel documentary “The Staircase” and an Oscar for the 2001 documentary “Murder on a Sunday Morning.”

“Sin City Law,” premiering Sept. 10, covers four cases; each gets a two-part documentary treatment, with the episodes airing back to back on Mondays at 9 p.m. and 10 p.m.

Poncet and De Lestrade, with director Remy Burkel, offer a harrowing tour of the Clark County legal system, introducing its assorted denizens along the way. The city of Las Vegas, its strip sparkling at night, provides a glitzy backdrop to the grim legal proceedings.

There’s no neat breakdown of crime scene and courtroom; this is hardly “Law & Order.”

The documentary cameras then delve into the stories as seen by various participants: the prosecutors, the public defenders, the killers, the victims, family members, investigators. Courtroom footage appears between behindthe scenes shots: a shopping trip to outfit a killer for court, blunt discussions between defendants and their lawyers.

Lozano, in one such encounter, vehemently rejects a prof- fered plea bargain.

The stories are nuanced, and it’s sometimes difficult to match the criminal with the crime: Maestas’ sister and co-defendant, Monique, offers a pretty prom queen smile that complements her perfect manners. (“Thank you,” she unfailingly bids public defender Alzora Jackson at the end of each jailhouse visit.)

And then a witness testifies how Monique recalled trying to stab her small victims in their major organs, an effort to cause the most damage.

In the series’ context, small gestures become bigger than life – and death. When prosecutor David Schwartz demonstrates the brutal death of Kristyanna Cowan by impaling a sheet of legal paper on the murder weapon and waving it before the jury, it’s more chilling than any crime-scene photo.

Unlike the typical TV crime show, the true-life crime dramas aren’t neatly wrapped up – everything is messy, from the crimes to the conclusions. A life sentence is considered a victory; are there any winners when a death sentence is imposed?

Time rolls on, for the guilty and the innocent and everyone else touched by the cases.

Lozano’s aunt, after hugging the mother of the slain 9-year-old in a courthouse hallway, suggests her gang-banger nephew and little Genesis Gonzalez will ultimately face the same judge.

“They are all in God’s hands,” she says in Spanish.

And Judge Donald Mosley, after presiding over the Maestas case, offers this fitting epitaph: “It is a tragedy all around … It’s just a disaster.”