Singer, songwriter Mike Havens to be ‘Pickin’ on the Mountain’ 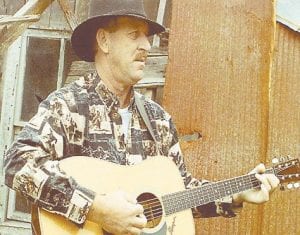 I recently caught up with Mike Havens in the WMMT radio station in Whitesburg. Mike and his band members were there promoting their soon-to-be-released CD titled “Down By the River” and I was there promoting Mike Havens’s Blue Mountain Grass band and the other fine bands booked for the Pickin’ on the Mountain bluegrass music show in Jenkins on June 16.

We were the guests of the Country Gentleman Ancil Trivette who hosts the early morning “Cumberland Sunrise” program, playing bluegrass and classic country music. His program has become one of the most popular early morning shows in the mountains. His selection of music and his quick sense of humor appeal to folks at home and on the highway. He also has a huge audience of midnight shift workers on the strip mines who use their cell phones to call in their requests. I’ve called him so many times I have his phone number, 633-1208, memorized. If you could see him work in the studio, you would swear he has three hands as he works the computer and the telephone and still keeps a cup of coffee in his hand. Well, there are a lot of coffee stains at his workstation.

I first met Mike Havens at the Cumberland Mountain Bluegrass Festival in Jenkins last July, where his band was among the crowd favorites. Since that time I’ve spoken by phone with him so many times it’s like we’re old friends or neighbors. I’ve not only become a big fan of his music, but I’ve come to respect him as a very sincere and unselfish person who loves music and loves interacting with his friends, his fans, and other musicians.

Mike said that he was open that day but there was no way he could bring his six-member band that distance for that small amount of money I was offering. I explained that this was our first production and we had a very small budget with which to work.

“Mike,” I explained, “we think we have the beginning of what can eventually become a major bluegrass music festival. If you can help us out now, I promise I’ll try to make it up to you in the future.”

“Give me a couple of days to talk with my band members and I’ll get back in touch with you,” said Mike.

I held my breath for two days waiting for him to return my call. Most popular bands have to be booked months in advance and my clock was ticking. I nearly jumped with joy when he called back and said, “We’re going to come up there and do the show for you, but you really need to work on your sponsorship for your future shows.”

I told him how much I appreciated his help and as we finished the conversation I said, “Mike, I owe you one.”

When the Cumberland Mountain Arts and Crafts Council decided to produce the Pickin’ on the Mountain bluegrass music show this year, Mike was the first one I called.

Mike is a prolific songwriter who has written or co-written about 90 percent of the music he records. His CD “Window of My Mind” has brought him a level of popularity that he had never known before.

“It would have been nice to have had this success when I was a young man, but it didn’t happen,” said Mike. “But I’ll take it anyway. I just feel blessed to have been able to do what I love doing.”

The Country Gentleman commented, “I have a lot of people call in and request that song, Lester Flatt and his crooked hat by Mike Havens. That’s not the correct title, but I know they’re referring to the ‘Tribute to Lester Flatt and Earl Scruggs’ song written by Mike on the recent CD ‘Window of My Mind.'”

One of my favorite songs from the CD is “County Paper.” Mike says that his son, Lincoln, had started writing the song but hadn’t been able to finish it. (That is not uncommon for a person doing creative writing.) “Lincoln came home to visit one weekend and was telling me what he was working on. I liked it so I said, ‘Let’s see what we can do with it.’ We finished writing it that weekend and had a good feeling about it so we got to the studio to record it right away. I knew it was good but I had no idea it would become the most popular song on the CD.”

I’ve memorized the humorous lyrics to the chorus so I can sing along when I’m listening to the song.

“If you was my girl I couldn’t give you the world but I’d give you three horses and my Grandma Pearl. I’d kiss you every night and make you smile before you went to bed. I promise I’ll never tell you no lies; when you’re old and gray I’ll be by your side and I’ll still kiss you, honey, even when your teeth are gone.” Now, that’s my kind of music.

Mike says he’s looking forward to getting back to Jenkins and meeting some of his old friends he made when he was doing road construction work on U.S. 23 a few years ago.

The Country Gentleman will be our master of ceremonies for the Pickin’ on the Mountain bluegrass music show. On the same show will be Mike Bentley and Dismal Pike from Pike County, the Glen Ritchie Band from Knott County, and the Tommy Webb Band from Langley. The music will begin at 1 p.m. and will run continuously to 9 p.m. The food booth opens at noon with a good variety of food, so come early and stay late for what promises to be one of the best bluegrass music shows of the season.

To get to the Little Shepherd Amphitheatre, take Route 3086 off U.S. Route 23-119 at Jenkins and go 1/4 mile to Amphitheatre Road. This event is produced by the Cumberland Mountain Arts and Crafts Council in Jenkins. For additional information, call 832-4122 or 832-1453.