Singer Taylor Swift learning to accept ‘a lot of trade-offs’ 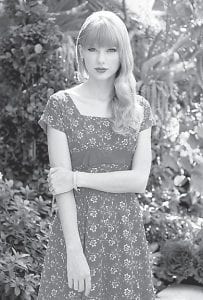 Musician Taylor Swift poses for a portrait. Her new album, “Red,” was released earlier this week. (Photo by Matt Sayles/Invision/AP)

On Taylor Swift’s new album, “Red,” there’s a song where the 22-year-old superstar sings about a fictional one: a famous singer who spends years under the glare of the spotlight, then ditches her uncomfortable fame for a life of solitude.

It sounds like Swift might be mapping out her eventual exit plan on “The Lucky One,” which depicts the troubling side of celebrity: tabloids, paparazzi, living life in a bubble. It’s certainly a scenario the multimillion-selling Swift can relate to: She’s become a fixture in the gossip pages, especially with her penchant for famous boyfriends, including her latest, Conor Kennedy of the storied political clan.

But if “Lucky One” has a plotline that Swift would eventually like to live out, for now, it’s just a daydream: Swift has come to embrace her larger-than-life status — and all the headaches that come with it.

“There’s a lot of trade-offs. There’s the microscope that’s always on you. The camera flashes, the fear that something you say will be taken the wrong way and you’ll let your fans down. There’s the fear that you’ll be walking down the street and your skirt will blow up and you’ll be in the news for three months,” says Swift, sitting at her dining room table in her whimsically decorated apartment in Nashville, dressed in a playful black shirt decorated with dogs and an appropriate red skirt.

As she rattles off a few more of the negatives of being in the limelight, she adds: “You’re scared of a lot of things for a lot of the time, but the trade-off of being able to get on a big stage and sing your songs — it’s worth it.”

Swift is perhaps on the biggest stage of her young career with the release of “Red,” out Monday. She’s already scored her first No. 1 hit on the Billboard Hot 100 chart with the Max Martin/Shellbackproduced “We Are Never Ever Getting Back Together.” The song is still in the top 10, and has company with her new song, “I Knew You Were Trouble,” which takes the country star into further pop territory with its use of auto-tune and dance synths.

While “Red” still has plenty of tunes that cater to her country fan base, as Swift was crafting the album, she was determined to “step outside my comfort zone.”

“On my fourth album, I wanted to do something that wasn’t what I’ve done for the first three,” she says.

Scott Borchetta, head of Big Machine Records, has worked with Swift since she was a teenager and watched her grow from a promising young country ingenue to one of music’s best-selling artists. As she worked on the followup to 2010’s “Speak Now” — which sold a million copies in its first week, netted her multiple awards and was the anchor for her soldout world tour — he noticed she was exploring other sounds not usually heard on country radio. He encouraged her to seek out producers like Martin, best known for crafting hits for Britney Spears, Pink and Kelly Clarkson.

While she worked with previous collaborators like songwriter Liz Rose and producer Nathan Chapman, she also tapped singersongwriter Ed Sheeran and Gary Lightbody of Snow Patrol; both are featured in duets.

Jeff Bhasker, who’s worked with everyone from Beyonce to fun. to Swift’s one-time nemesis Kanye West, was also involved in the making of “Red.” Swift emailed him directly after admiring fun.’s bombastic drum sound and soon afterward, they were recording.

“She came just by herself and brought her guitar to the studio and played me this song ‘Holy Ground’ on my couch, and sang it all the way through perfectly and I was just blown away at how stone cold she was,” says Bhasker, who also worked on “The Lucky One.”

“Her style of songwriting is very, very honest,” he adds. “She’s just a really old soul.”

Heartbreak is again the muse for many of her songs. While she’s seemingly in a dreamy relationship with Kennedy, grandson of the late Robert Kennedy, during the making of “Red” she had a well-publicized (but brief ) romance with actor Jake Gyllenhaal that ended in heartbreak — according to those pesky tabloids.

“My mind frame during this recording process and the writing process was the ups and downs of a few really tumultuous relationships that had, you know, various amounts of damage and impact and things that were really tough for me to get through,” Swift explains. “And that’s typically when I turn to songwriting, when I don’t quite understand how to say what I feel because it’s all so much.”

While she admits that her songs are autobiographical, she sticks to her rule of not disclosing whom they are about: “I just like that I like the way my personal life sounds in songs so much better than I do in quotes and interviews.” She declines to talk about her current romance, and even though John Mayer outed himself as the subject of 2010’s scathing “Dear John,” she refuses to confirm it, calling him “presumptuous.”

Still, that hasn’t stopped plenty of people from writing about the supposed intimate details of her life. Dating a Kennedy who’s four years her junior (and happens to be a senior in high school) has only added to media swirl.

Swift isn’t oblivious to the attention, but she tries her best to protect herself from it: She refuses to read articles about herself or combat what’s being said about her, good or bad.

She’s developed empathy toward other celebrities: “I understand why people sometimes get so caught up with this because it’s a lot of pressure. And when you see someone going through a scandal in the news, I don’t sit there and see it as entertainment anymore.”

But she knows this is what she bargained for — and she’s still happy the way it all turned out.

“Sometimes my mom and I just sit there and think, ‘Remember when nobody believed this could happen for us, and we didn’t even believe it?’” she says. “It’s crazy to look back at that and think, ‘How did that ever work?’ How did it happen?’ I mean, we actually got further than we actually ever imagined. I wouldn’t change anything.”