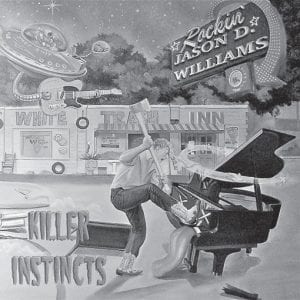 Even on ballads, Jason D. Williams lives up to his reputation as a rockabilly wild man. The first slow song on “Killer Instincts” references life in prison, the JFK assassination, marijuana and Christmas. The title is “If You Ever Saw a Baby …” and when the tune ends, Williams confesses he wrote it.

Not everyone would make such an admission, but Williams is quite comfortable in the role of a slightly crazed piano-playing singer. The Arkansan has long drawn comparisons to Jerry Lee Lewis and does a fair share of Killer impersonations here. With encouragement from producer Todd Snider, Williams also gave songwriting a try, and the titles hint at the resulting fun: “To Hell With You,” “White Trash” and “You Look Like I Could Use a Drink.”

Even when Snider flavors the arrangements with horns, there’s an informality appropriate for the material, and the whole thing comes off like the third set of the night at the neighborhood roadhouse. Williams pounds the bejabbers out of the piano, whether he’s playing honky-tonk, a Yiddish instrumental solo or Lewis’ “Wine Spo-Dee-ODee.” Pass that bottle.

CHECK THIS OUT:
Williams gets religious — sort of — on back-to-back cuts “Sanctified” and “Mr. Jesus.” The former is a rousing stomp that bridges the divide between gospel and early rock; the latter comes off like a Bible Beltin’ Tom Waits.