Odds of epidemic have increased 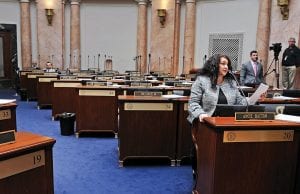 ANOTHER SIGN OF THESE TIMES — House Minority Whip Angie Hatton, D-Whitesburg, is pictured communicating votes transmitted to her by minority members on House Bill 352, the recently-approved state budget. House members practiced social distancing by watching the proceedings from outside of the chamber and communicated their questions, comments, and votes through House Leadership who remained on the floor. Rep. Hatton writes about the budget and why she voted in favor of it on Page 4.

The single case of COVID-19 reported in Letcher County has increased the chances that an epidemic is already underway here to 51 percent from just 9 percent before that case was found, research from the University of Texas shows.

In Letcher County, the 50-year-old man is self isolating and does not require hospitalization at this time, Lockard said. The test was returned from a commercial laboratory, and Lockard could not say when it was performed. He said commercial lab results can take as little as 48 hours, but can take up to 10 days. He said there is no blanket warning to the public because the epidemiology team believes it has contacted everyone at risk of being exposed to that particular patient.

However, Lockard said residents should assume that the virus is here and should not be out in the community unless absolutely necessary. He said the patient’s travel history is no longer relevant because there are cases all over the state.

“Now it’s springtime in Kentucky, and we are going to have allergies, allergies, and more allergies for many of you,” Lockard said. “Please be mindful. Just because you have a sore throat, you have a cough, or you’re running a fever, doesn’t mean you have COVID-19. If you get sick every spring from allergies, you’ve probably got allergies again.”

He urged residents with any of those symptoms to call their doctor first, and the doctor will either do an online consultation, or make arrangements for them to enter the medical facility through a separate entrance.

Lockard said epidemiology teams here have been tracing the contacts of the man who tested positive, and have been in contact with everyone they could determine was at risk of exposure.

“If you haven’t been contacted, your risk of high exposure is very, very low,” Lockard said.

Lockard would not say in what business the man works. Lockard said several years ago when there was a hepatitis A outbreak, it was determined that Patient 0 worked in a restaurant, and therefore it required a blanket notification of the public. Since that is not the case with that patient, Lockard declined to say where he worked in order to avoid releasing identifying information.

Lockard could also not say how long it took between the time the test was performed and the time the results came back, noting that state tests may be returned within 24 hours but some private laboratories are taking seven to 10 days to return results.

That has changed over the weekend. Gravity Diagnostics in Covington made an agreement with the state to begin testing immediately, and will be returning tests in 24 hours. Governor Andy Beshear announced the deal on Sunday.

On Tuesday, state Commissioner of Public Health Dr. Steven Stack said the state is partnering with 32 hospitals outside the “Golden Triangle” of Lexington, Louisville and northern Kentucky to get tests done through Gravity and speed up the return.

Stack said United Parcel Service worked through the weekend to pick up the tests and delivered them to the first hospitals by Monday afternoon.

“The first 12 specimens arrived before 6:30 a.m. this morning. I consider that to be a great success to pull that around that fast,” Stack said. “We are going to ramp that up to maximum capacity of 2,000 tests a day distributed regionally around the state, partnering with those 32 hospitals. It’s subject to the availability of swabs and testing materials, which continues to be a roadblock.”

The Gravity tests are being done in order of priority. Persons must have fever, cough, shortness of air, or diarrhea, and must also be a healthcare provider, or people living in a congregate facility such as a nursing home. The second priority is people with secondary chronic medical problems such as asthma, COPD, diabetes, or compromised immunity.