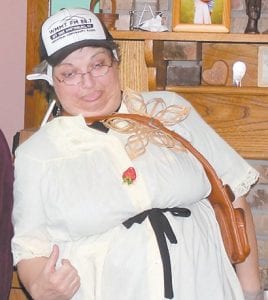 Have you all ever heard the old saying, “Payback is a raw dog”? I have no idea where it originated, but I’ve heard it so many times. Most of the time my husband says it to me in a joking manner. But, this week I am getting back at my sister, Delores Tacket Holbrook, and you would never believe what for!

Last week I was at Mom’s one evening canning green beans and she was there, too. Well, she went to the back bedroom to get her grandbaby to sleep and I was waiting for the pressure to get high enough on the canner before setting the timer. Her Kindle was there and I was going to play some word games on it. When I opened it the camera on it was what was open, so I just got a wild hair and thought I would leave her a little video of me making faces at her. Well, lo and behold, the next morning when I checked my Facebook there for all of the social media world to see was my little video meant only for her. She also added a few little sentences stating how I was supposed to be the brains of the family and she was supposed to be the nut job. 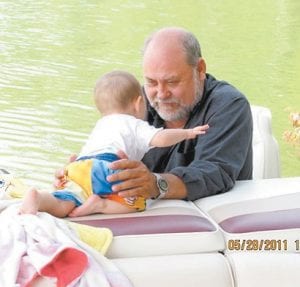 Charles Yonts with one of his grandsons, Jude Yonts

Well, I laughed out loud until I about cried. I told Mommy on her and all she did was shake her head and said, “That girl just won’t do!” So, I thought you all might like this picture of Delores Tacket Holbrook, and I actually have more that I am going to save just in case she decides she wants to put something else about me on Facebook.

This was taken at Mom’s one year at Thanksgiving. My grandson would always do this little skit at our house and I asked him if he would share it at Mommy’s for all of the family. Well, when I mentioned it to the nut job of the family she wanted to join in with him. They used anything they could find at Mom’s to dress up and acted as if they were both older women having a conversation. Of course, I had to crop him out of the picture. Needless to say, we were all sore the next morning from laughing so hard at them.

I got a call today from Lizzie Mae Wright, our good friend. She hasn’t been able to come to the rec center for a few weeks now. She said she has been wearing a heart monitor and will turn it in this week for them to follow up on her heart. She has also had a stress test and other heart tests done and so far nothing has shown up bad. We surely do miss her at the Letcher County Senior Citizens. She has all kinds of neighbors around her that are doing a wonderful job helping her. 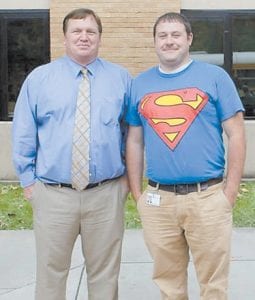 I talked to Pat Wright today also at the rec center and she said her husband Doug Wright was doing some better since taking his chemo treatments and that he was able to come down to the center Friday evening. I was there in the morning so I missed him.

If you like playing corn hole you are missing out on some interesting games at Senior Citizens. From what I hear everyone wants to be James Hall’s partner. They say he’s like a professional.

We’ve also been taking Tai Chi classes in the Senior Citizen Program. Our instructor has surely been patient with us. She says she is going to video us after we complete all the lessons. Now, that ought to be interesting. Our classes are on Mondays and Thursdays at 10 a.m.

Speaking of classes, you all really do need to check out what’s going on with the Letcher County Extension Office. I found on their Facebook page where one of our local farms, SouthDown Farms, has won awards for its maple syrup. Also, I searched on their Facebook page and found all kinds of information about the farm I didn’t know. Here’s what they had to say about the name of their farm.

“Have you ever wondered why we named our farm SouthDown Farm? It actually a spot on the map where we live. Craft’s Colly is the longest holler in Letcher County without an outlet. One way in, one way out. SouthDown is halfway up the holler. According to his granddaughter, William Manon Holbrook was the first postmaster of the SouthDown Post Office. William named the post office Southdown after the breed of sheep he was raising at the time. I remember a one-room schoolhouse building and have had someone who read this post say they have letters with a postscript from the Southdown Post Office. Southdown is a distant memory to some, unknown by others. Now you know the rest of the story.”

Also, remember all those that have lost loved ones, especially our pastor Bill Jones and his whole family.

And always think about Oma’s plea: try to be in church Sunday morning and Sunday night and throughout the week if your church has services then.