‘Sister Wives’ back for new season 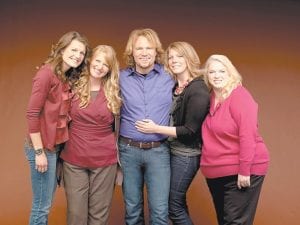 Kody brown, center, poses with his wives, from left, Robyn, Christine, Meri and Janelle in a promotional photo for the reality series “Sister Wives,” which airs Sundays at 9 p.m. on TLC. (AP Photo/TLC)

They laugh a lot.

Maybe the Browns were just happy to be back in New York City, where they had landed to plug the second season of their TLC reality show, “Sister Wives.”

The Browns love being in New York, make no mistake. But something larger is going on as they meet with a reporter in midtown Manhattan to discuss the show and their plural marriage, which “Sister Wives” documents. It’s easy to see that Kody Brown and his four wives share a closeness and a comfort zone and, yes, a sense of humor that keeps the conversation at a gallop.

At one point, their newfound celebrity (a word at which they cringe) is broached.

“ It’s embarrassing!” cracks Christine, Kody’s wife of 16 years, with whom he has six children, the youngest being 10 months old. “It’s embarrassing when someone recognizes you in a store and you have on no makeup and you’re wearing your home pants. A man spoke to me who said he watched the show. I thought, ‘You recognize me THIS way? Why should I put on makeup? Why dress up?’”

The room rocks with laughter.

Certainly the mood is lighter than on their previous New York publicity hop last fall.

Sunday’s season premiere captured scenes from that media tour, as the Browns made appearances to introduce a TV series no one had seen yet, a series headlined by this unconventional Utah family that already was raising eyebrows coast-to-coast.

At the same time, the Browns — nervous but resolute — were publicly coming out as polygamists.

But exposing their lifestyle to the world was a big reason the Browns had welcomed the opportunity to see their story told on a TV series. They were tired of keeping secrets and living in fear. They were tired of the misconceptions and stereotypes that defined polygamy in many people’s minds (including HBO’s extreme polygamy drama “Big Love,” which some of the Browns say they have watched and enjoyed).

“I went through high school hiding who I was,” says Robyn, who wed Kody on last season’s fi- nale, bringing three children from her previous marriage into a brood that now numbers 16. “ I shut people out because I didn’t want to be labeled and made fun of.”

“We’re not trying to proselyte our faith or our lifestyle,” says Kody, who is legally married only to Meri, his wife of 20 years. “We’re just looking for acceptance.”

“And I think we’re getting that,” says Meri, with whom Kody has a 15-year-old daughter. “People will tell us, ‘It’s not for me. There’s no way I could share my husband with somebody. But I am totally for you doing it, if that’s what you want to do.’”

But acceptance for the Browns’ family values hasn’t been universal.

“There have been a lot of people who have opposed it,” Kody acknowledges. “They say they still think it’s creepy.”

Potentially more serious, the attention the show brought on the family triggered a criminal bigamy investigation in Utah — and a new wave of unsought national attention. That threat looms as the second season starts.

No charges have been filed against the Browns, who practice polygamy as part of their Fundamentalist Mormon beliefs. (The mainstream Church of Jesus Christ of Latter-day Saints abandoned polygamy more than a century ago.) But the possibility of legal action played a part in the family leaving Utah a few weeks ago.

But only a part, insist the Browns, who hope to start a business in the Las Vegas area that involves the whole family. (Kody previously worked in ad sales and Janelle had a job in accounting.) Like Utah, bigamy is illegal in Nevada.

“We saw some new opportuni ties there,” explains Janelle, Kody’s wife of 18 years, with whom he has six children. “It’s 70 degrees at home today, and it’s 30 (degrees) and snowy in Salt Lake. There were a lot of reasons to move.”

The Browns pull up stakes in the 10th episode, right before a midseason break for the series.

Whatever the seeming oddities (and super-sized proportions) that set the Browns apart from “normal” families, “Sister Wives” is most striking in the way it charts common ground with any other loving, busy family.

Going about their daily lives, sharing chores and outings, with bumps in the road, but also laughs, the Browns are relatable on many levels.

“Kody maintains a good marriage with all of us — each one of us, individually,” says Christine.

“He’s a gentleman and he’s very fair with us,” says Meri.

“And sometimes,” Christine jokes, “we’re fair with him.”

“And fair with each other, too,” adds Janelle.

“If you’re going to be successful in this lifestyle,” says Robyn, “you’ve got to treat each other with respect.”

“Or in any type of marriage,” suggests Kody.

TLC, which airs locally on TVS Cable on Channel 33, is owned by Discovery Communications, LLC.