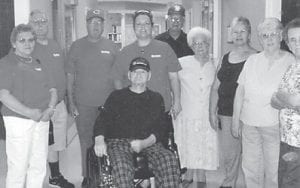 The late Clyde Hatton poses with friends from the Ermine Senior Citizens Center who visited him at Kentucky Veterans Center in Hazard. “He was so pleased to see them,” says Whitesburg correspondent Oma Hatton, his widow.

Hello everyone, hope you are all doing well. It’s so cold in the mornings! Do you reckon it’s winter?

We have had such good weather and really enjoyed it, but it is December now, and “Christmastime is coming!”

I was so pleased to get a birthday card from my son Rob’s neighbor, Goldie Payne. I met her a few times and really liked her a lot. I told Rob I wished she was my neighbor, but I’m glad she lives close to Rob. He lives so far away and he talks a lot about Goldie and Charlie.

I was so sorry to hear Janice Reed had died. I had known her about all her life. I went to her funeral. I know the workers at Save-A-Lot store will miss her, and also the people who shopped there.

My sister Joann Brown and husband Don have been in for the funeral of another brother who died, William Martin. It’s just a short time ago that he lost another brother and another family member.

I had lunch at Dairy Queen with Joanne and Don and my brothers John and Hubert. We really enjoyed a long lunch and lots of talking and seeing other folks there. I love Dairy Queen. 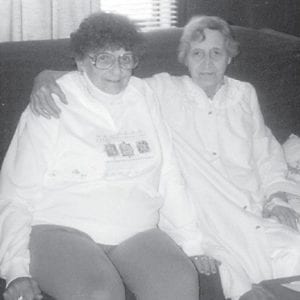 We had a Christmas bazaar at our church and it went well. We had so many pretty things and great food, and many people came in. Thanks to Vickie, Jack, Bro. John, Alicia, Roger, Ida Hatton, Randall and Faye Combs, Brandi Baker and all the rest of the people who worked so hard.

Just by good accident five of us sisters, myself, Louise Shepherd, Kathleen Brock, Betty Tyree and Joann Brown, all got together at the home of my brother, Hubert Howard and his wife Joyce. Everyone seems to go there. They are so nice and friendly and make good coffee, and they usually have some good snacks.

I was sorry to hear that Bonnie Ingram had been sick and I hope she is doing better. I always read her news. I had some family that were Ingrams of Linefork. I don’t know if any of them are still living.

It’s been a long time ago that I got a call from Earl King’s daughter Earlene. She said that her dad had been sick and came home from the hospital, and his heat pump had gone out. I hope he got it fixed. I’ve known the King family for many years from Marlowe.

I really appreciate Everidge Funeral Home for putting a light on the Christmas tree at ARH on Dec. 6 in memory of my late husband, Clyde Hatton, and thanks to Whitesburg ARH Ladies Auxiliary. I really appreciate all the nice things they do. We don’t tell them often enough.

My brother Jack Howard and wife Donna have gone to Oklahoma to visit their daughter Crystal and her family. I’m sure they will enjoy themselves. That’s a long ways away.

I visited my son Larry and wife Linda when he was stationed there. That was over 40 years ago? Must have been. They didn’t have any children then, and now they have grown grandchildren.

Time really does fly. We’ll soon be getting old, won’t we?

I haven’t heard from some of my longtime friends like Iva (Absher) Cheatham, and Bertha (Page) Dye. I hope they are doing all right.

Rose Ballard, you keep mentioning the names of Betty and Doyle Ison with health problems. I found out that Betty was a Hamilton and was a relative of mine. I hope she and her husband are doing better. I always look for their names. Betty and family all lived here near me. I see her sister Bessie sometimes.

I haven’t been out much and don’t have much to write about.

May God bless all of you. Try to be in church somewhere if you are able.