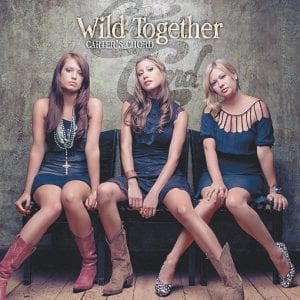 The cover of the latest release by Carter’s Chord. (AP Photo)

Becky and Joanna Robertson and Emily Robertson Fortney first recorded as youngsters in 1998 with the late Waylon Jennings on the country music outlaw’s children’s album, “Cowboys, Sisters, Rascals & Dirt.” Then Oklahoma roughneck Toby Keith signed them to his record label, featured them on the soundtrack to his film “Beer For My Horses,” and now co-produces their second album, the six-song EP “Wild Together.”

The album proves why the trio has garnered such big-time support. With the kind of close harmonies only siblings can create, Carter’s Chord avoid current Nashville trends; their lyrics don’t focus on the joys of rural life or on female empowerment, and they don’t present pounding countryrock or vocals that constantly show off how loud they can sing.

Instead, on songs like the title cut or the new single, “A Little Less Comfortable,” the sisters offer bold takes on how young adults deal with the tentative steps of new relationships or the difficult trials of keeping things together.

CHECK THIS TRACK OUT: “Simple Little Screwed Up Life” uses a swampy, steamy arrangement to set a scene for a young woman who, amid a head-spinning first kiss, warns the guy falling for her that he better prepare himself for a wild ride.