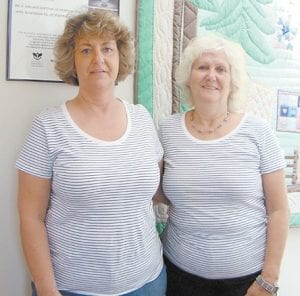 Lavonne Miller, left, and Shirley Nichols posed for this photograph in Whitesburg recently. The sisters met on the social media website Facebook and have been looking for information about their mom.

Mae Belle Hall was, if photographs are reliable, a beautiful woman. She loved to travel. She loved music and musicians; in fact, Marion Sumner, the late, widely-acclaimed musician from Isom, was her third husband and the father of her son, Marion Jr., who died a year or so ago.

But Mae Belle was not as fond of parenthood.

Two of her daughters, who met through the social network Facebook for the first time in March, were in Whitesburg recently looking for remnants of their mother, who abandoned both of them, as well as Sumner and perhaps five other children.

Shirley Nichols was born in 1943 when Mae Belle was a teenager and married to Troy McDaniel of Litt Carr. Shirley’s mother left her to be raised by the baby’s grandparents.

Lavonne Miller was born in 1960 when her mother was married to Burley Miller, then a Perry County deputy sheriff. This was Mae Belle’s third marriage, occurring after she had left Sumner, her second husband.

Nichols, who now lives in Quartzsite, Ariz., and Miller, who has spent her life in Hazard, found each other with the help of relatives who aided in the search.

“I had made up my mind to get off Facebook,” said Nichols, who manages an RV park. “But the next day, I decided I’d better get back on to keep on seeing new pictures of my grandchildren.”

That day, a cousin in Louisville told her, “Don’t log off. We’ve found your sister.”

Nichols then connected to Miller’s daughter, who taught her mother to use the network tool. “I got on and said, ‘Good morning, sister,’ and we haven’t missed a day talking on Facebook or on the telephone,” said Miller, the quieter and younger of the two.

Nichols came back to the mountains for the two to spend a week together and to learn more about their roots and the unknown mother they share.

“ Mom was always in music,” Nichols said. “She sang along with her brothers Willie and Joe Hall Jr., and she sang with Marion (Sumner).”

They heard Mae Belle sang on a radio station and may have recorded music. “I would love to hear her,” Nichols said.

Also during her trip east, Nichols drove out to the site of a former orphanage in Premium, where she spent four years after her grandparents could no longer take care of her. She remembers “a big old colonial home” that served as the girls’ dormitory.

She was also in two foster homes, including that of Hazel and Wardie Craft in Morgan County, who helped raise countless children from throughout the region.

At 17, Nichols went to Indianapolis to live with relatives. Miller said she was shocked to learn of her older sister’s adventures and hard times, including Nichols’s 20 years as a long-haul truck driver.

Mae Belle’s eldest child settled in the Southwest in 1999, but she spends summers working for the National Parks Service in Idaho.

Nichols’s semi- retirement led to an unusual avocation as a stand- up comedian. “They’re crazy about bluegrass music in Arizona,” she said, “but I thought there was room for comedy.”

She worked up a routine in which she plays a character named Aunt Minnie, who tells jokes and talks about her mule Gert. She also sings and plays two homemade instruments: a “commodean,” made out of a commode seat, and a “gut bucket,” featuring a pole and a string attached to a bucket.

“I clog and do lap dances, too,” she laughed. “I sit on men’s laps and rub Preparation H on their heads.”

Nichols said she long ago accepted her mother’s abandonment, but Miller has had a tougher time in forgiving.

Mae Belle stayed with baby Lavonne for four years, giving the child a chance to know and remember her and making the loss more heartbreaking.

Recalls Miller, “Mom and Dad always took me to Sunday school, but one Sunday, she said she was sick and stayed home. When we came back, she was gone. A neighbor said she saw my mother walking down the road with a paper bag.”

Miller was raised by her protective father, who never remarried. Although her mother tried to contact her a few times, Miller withheld her forgiveness. Mae Belle wrote to her daughter shortly before she died to tell her she had breast cancer and to warn Miller to be alert for the disease.

Nichols said she saw her mother briefly four times, the fourth at her mother’s funeral.

“ I thought she was a very nice lady and had a good personality,” said Nichols, adding that she understands her mother’s wanderlust and weaknesses because she shares some of the same traits.

The women think their mother had eight children in all, but they have not met the others. They’re trying to find some siblings in Maryland where Mae Belle lived for a time.

Nichols said she long ago forgave her mother and has helped her sister set aside some of her deep resentment.

“My theory is she loved music and liked to travel,” said Nichols. “I think she was always looking for that perfect something.”

The women would like to hear from people who may have known Mae Belle Hall or know of her music. They can be contacted on Facebook.