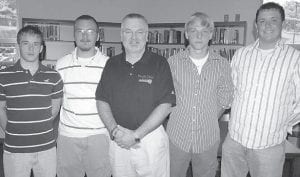 Ken DeCook, coach of the men’s and women’s soccer programs at Pikeville College, signed Austin Sizemore, Brandon Little, Dustin Adams, and Josh Fleming to join next year’s squad, as DeCook looks to make Pikeville College competitive in soccer following a dismal 2006 season in which the men’s team finished with a 1-17 record.

The signing of these players is a step in the right direction, as they have helped the Letcher Central soccer program blossom into a respected team after only two seasons in existence. The 2006 team finished with a record of 13-6-1 and was district runner up.

“As a group, it was their attitude of willing to come in and work hard to earn whatever spot they can have” that attracted DeCook to these players. “Each of them brought phenomenal attitude and approach not only for soccer but for getting a quality education.” 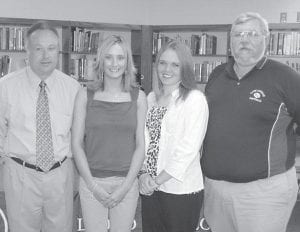 Each signee expressed feelings of joy and excitement following their signing. Austin Sizemore described the day as “what I’ve always wanted to do . . . a dream come true.” Dustin Adams expressed similar feelings, saying, “It’s something I thought about when I was younger, but never thought it’d be anything like this.”

The players also expressed goals of earning their spots of the team. “I’m really going to have to step up my game,” said Josh Fleming. When asked his goal for his freshman season Brandon Little replied, “I want to keep my grades up and help the team any way I can.”

Letcher Central softball was also well represented in the whirlwind of signees, with two of its seniors signing with Alice Lloyd College. Ashley Mynster and Ramie Adams will join the fairly new Alice Lloyd softball program, after coach David Adams picked up what he described as “two of the better (players) anywhere.”

Ashley Mynster was forced to sit out her senior year following a severe knee injury in the girls’ basketball district tournament this past year, but expressed optimism for the future following her signing. “I’ve always wanted to continue on after high school and I’ve always been afraid I wouldn’t be able to . . . but I get to go on and play my favorite sport.”

Letcher Central’s ace, Ramie Adams, has remained humble despite all of her success and her dominance of opponents. “I’ve always wanted to know what it’s like to play in college and now I get to and I can’t wait to get started.”

Adams and Mynster were part of the 2006 district championship team.