Six sentenced to prison or probation

Final judgments have been entered in the cases of five men and one woman who have pleaded guilty in Letcher Circuit Court. Those ordered to serve jail or prison sentences or terms of supervised probation are:

• Christopher Brown, 31, of Seco, is now being held at the Roederer Assessment Center in LaGrange. Special Letcher Circuit Judge Eddy Coleman sentenced Brown to one year in prison after Brown pleaded guilty to first degree possession of a controlled substance (methamphetamine), unlawful possession of a meth precursor, and first-degree fleeing or evading police. Brown is also ordered to pay restitution in the amount of $906.50 to the Kentucky State Police Drug Enforcement and Special Investigations unit.

• Kevin Adkins, 20, was ordered held in the Letcher County Jail without being entitled to bail recently after Letcher Circuit Judge James W. Craft II voided a pretrial diversion agreement between Adkins and the court. In his ruling, Craft said Adkins has “shown a complete disregard of the conditions of his pretrial diversion.” 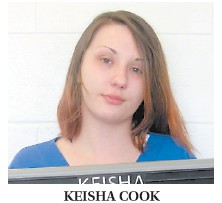 • Byron Ellis Bentley, 37, of Jenkins, was sentenced to one year of supervised probation by Judge Craft after he pleaded guilty to charges of second-degree fleeing and evading police, second-degree wanton endangerment, carrying a concealed weapon, reckless driving and operating a motor vehicle on a suspended/revoked operator’s license. Bentley was indicted by a Letcher County grand jury last April after an incident involving Jenkins police.

• Timothy Ray Sexton, 35, of Whitesburg, is also being held at the Roederer Assessment Center in LaGrange after pleading guilty to first-degree possession of methamphetamine (first offense) and public intoxication (excluding alcohol). Sexton committed the crimes November 27, 2017. He will be eligible for consideration for parole on March 15, 1019.

• Kesha Cook, 29, of Pistol City was sentenced by Judge Craft to one year in prison after she pleaded to guilty to being a convicted felon in possession of a firearm, a crime she committed on July 25, 2017. Craft ordered that Cook’s sentence be served consecutively with four five-year sentences she began serving for meth-related charges on May 4. Now housed at the Kentucky Correctional Institute for Women at Peewee Valley, Cook will be eligible for parole consideration in March 2020.

• Joshua James Ison, 37, of Kingdom Come Creek, Whitesburg, was sentenced by Judge Craft to three years in prison after Ison pleaded guilty to third-degree burglary in connection with the theft of tools and other items from a private home last February 8.

Ison, who was ordered by Craft to pay $3,751 in restitution to the homeowner, will serve the three-year term concurrently with a five-year prison term ordered by Craft after Ison pleaded guilty to four counts of first-degree wanton endangerment, two counts of first degree fleeing or evading police, one count of first-degree disorderly conduct, resisting arrest, and driving under the influence of alcohol or drugs while his license was suspended. The latter crimes occurred on November 16, 2017 when Ison hit a Letcher County Sheriff ’s Department cruiser on KY 160 at Premium and then led police on a high-speed chase that ended when Ison wrecked near the mouth of Little Colley at Isom.