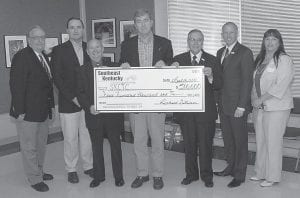 The Richard and Leslie Gilliam Foundation has made a donation of $500,000 to Southeast Kentucky Community & Technical College for scholarships. A ceremony was held recently on the Cumberland campus as Gilliam, who is the former owner of Black Mountain Resources Coal Co., announced that his gift will honor longtime SKCTC President Dr. W. Bruce Ayers. Taking part in the ceremony were from left to right: Paul Pratt, SKCTC dean emeritus, Ross Kegan, vice president of operations for Black Mountain Resources, Reecie Stagnolia, chairman of the SKCTC board, Richard Gilliam, Dr. W. Bruce Ayers, Tim Burcham, KCTCS vice president and Susan Caldwell, director of advancement at SKCTC. (Photo by Chris Jones)

Southeast Kentucky Community & Technical College students will benefit from a $500,000 donation from the Richard and Leslie Gilliam Foundation.

Presentation of the gift was made April 14 in a ceremony held on the Cumberland campus. The gift, according to the college’s Director of Advancement, Susan Caldwell, will go into an endowment fund for student scholarships. “When we are able to match the gift, sometime in the nottoo distant-future, we will have $1-million in the endowment fund which will draw interest in perpetuity, thus, benefiting students for years to come.”

Ross Kegan, vice president of operations at Black Mountain Recourses, formerly owned by Richard Gilliam, announced during the ceremony, and to the surprise of W. Bruce Ayers, that the scholarship fund will be named in honor of the long-time president of Southeast who has been associated with the college for nearly a half a century, first as a student, then as a faculty member and since 1987 as the CEO.

“It is easy to give money when you trust the people you are giving it to, and you can see the fruit of their efforts and their labor,” said Kegan. “I commend Dr. Ayers on the job he is doing; some give money for recognition, some give because it’s a good cause, and this is certainly a good cause.”

Gilliam and Black Mountain Resources have been associated with the region and Harlan County for a number of years. He said when he sold his company a year ago, he had 650 employees in the area. “ Those were high-paying jobs, probably $70,000 to $75,000 per year,” said Gilliam. “We think it’s an admirable industry to be in, however, I also think it makes sense for people to have other options, and this college offers those other options, which is to give people a chance to get a higher level of education. We just wanted to help.“

Ayers said Giliam had donated in the past to help the college. In 2009, Black Mountain Resources donated $110,000 to the scholarship fund, which was matched with $50,000 through the college’s Endowment Match Program.

“ It’s important to note the scholarship fund Mr. Gilliam is creating today will support not only students who go into the mining industry, but all of our students – regardless of their field of study,” said Ayers.