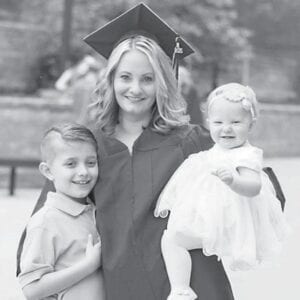 For 2016 Southeast graduate Megan Beverly, it was personal.

The young wife and mother from Hazard enjoyed living close to her extended family and working in restaurant services when the unthinkable happened: Her second child died in infancy from the rare genetic disorder Pompe disease.

“Brady was five months and 25 days old when he passed,” said Beverly.

Current studies show that Pompe disease affects approximately one in 40,000 babies in the U.S. each year. It causes a buildup of glycogen resulting from an enzyme deficiency, and it primarily affects the liver, heart, and muscles.

“All of those children die of respiratory failure,” she said.

Although devastated, Beverly turned her heartbreak into a mission—to become a respiratory therapist and treat other babies in respiratory distress. She enrolled in classes on the Whitesburg Campus of Southeast Kentucky Community and Technical College and transformed her life.

“I went into a deep state of depression,” she said. “But God moves you in the path that you are supposed to be in.”

She says that at Southeast, she could not have asked for a better education than she received from Professors Wendy Wright and Mike Good. Of Wright, she said, “She is hard on you, but she will stand on her head to help you. I know that I can call her to this day with questions.”

She also credits the clinical instruction she received at Hazard Appalachian Regional Hospital with teaching her “how to work and how to build things from scratch. They teach you old school ways that you need when technology fails. It gave me an advantage.” According to Beverly, her clinical instructor Greg Reeves taught her “critical thinking skills.”

Since then, the pieces of her life — and heart — have fallen into place. While she was still enrolled at Southeast, she and her husband Brandon welcomed a daughter, Paisley. In June 2016, Brandon Beverly accepted a job at Toyota in Georgetown. After graduating in May, Megan Beverly applied for a job at Cincinnati Children’s, currently ranked as the number three children’s hospital in the country by US News and World Report.

“I really didn’t think I would get it,” she said. “It’s a very competitive hospital with a huge RT department, but I thought I should at least try.”

The risk paid off, and she was hired as a respiratory therapist in the hospital’s pediatric intensive care unit — the same unit where she had lost her beloved Brady years before.

“It was hard at first, but I wanted to do it for Brady,” she said. “I give 110 percent, and I treat those children as my children. It has been a healing process.”

Her dedication to her tiny patients and their families has not gone unnoticed. In May, after five years at Children’s, Beverly received the award for Excellence in Critical Care. This award, which recognizes a nurse and a respiratory technologist in alternating years, is decided by peers and attending physicians.

Southeast Professor Wendy Wright said that she is very proud of her former student who was distinguished from among “hundreds of others in her field” at Children’s. According to Beverly, caring for ailing children is reward enough.

Today, she makes the hour-long commute to Cincinnati from her home in Georgetown, where she and her husband live with their children Cayden, now a seventh grader, and Paisley, who has just started kindergarten. Her advice to anyone who considers pursuing a college education is that “anybody can do it. It doesn’t matter the circumstances. You can change your whole life around, no matter what you’ve been through. It just takes strength.”