Skin rash associated with many conditions 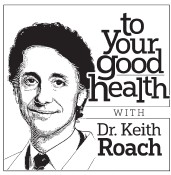 DEAR DR. ROACH: I am a 64-year-old male in good health. I had an outbreak of blister like sores on my upper torso, in my mouth and near my eyes. I had an almost incapacitating feeling and was able to consume only liquids and shakes because of the mouth blisters. The blisters took their course in seven to 10 days and scabbed over. These episodes reoccurred three separate times, returning two to three weeks apart.

Just prior to the outbreaks, I started taking Aleve because of sore knees while I was walking. On the third outbreak, I consulted my dermatologist, and he observed a reddened throat without any noticeable soreness on my part, so he swabbed the throat, and it showed strep throat. The sore throat was treated, and I believe I was also given steroids.

The physician’s diagnosis was erythema multiforme. The doctor thought the EM was related to the strep throat, and he wasn’t sure if the Aleve played a role. I am interested in your thoughts on the possible causes of the EM and the chances of it returning. I have been blister-free for a year now, but fear that the EM will return or that there is some underlying autoimmune issue. — T.C.

ANSWER: Erythema multi forme is a skin rash with a characteristic target appearance. They tend to appear on the backs of hands to the elbows, or on the legs from the top of the feet to the knees, and then appear closer toward the body. They stay for a few days and then leave after two weeks or so.

EM has been associated with many medical conditions, including autoimmune diseases; however, 90 percent of EM is related to infection. The most common infection is herpes simplex (the cause of cold sores as well as genital herpes). Strep throat is not a common cause of EM. However, the naproxen (Aleve) is a well-known cause.

I would advise against using Aleve or related medications, and reassure you that the likelihood of a hidden autoimmune disease is low.

DEAR DR. ROACH: I am in good general health. My problem is not being able to drink enough water to quench my thirst, especially in warm weather. If I drink more than 25 ounces per day, my stomach becomes upset. In warm weather, I have to balance my fluid intake between dehydration and an upset stomach. I am not diabetic. Is there a solution? — E.K.

ANSWER: A sensation of feeling bloated after fluid intake is not uncommon among athletes during competitions. I have heard many possible treatments. These include sipping fluids slowly over time; however, some people seem to find relief by gulping fluids down in large amounts, the theory being that distending the stomach stimulates it to contract and send the fluid into the intestines to be absorbed.

Having some food with the fluid helps many people, especially starchy foods (like cereals or crackers) to absorb lots of water. Tepid water may be more easily absorbed than ice-cold water. If none of these works, you might try adding a little fruit juice and very little salt to your water, which should reduce the stomach upset.