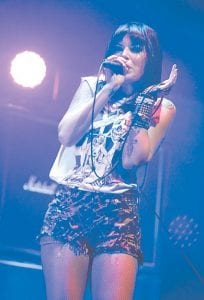 Alexis Krauss is the lead singer for Sleigh Bells, a duo who appeared in Asheville, N.C., last week. (AP)

While many residents of Asheville, N.C., were settling into bed and preparing for the next day, vibrations of sound were emanating out of the city’s utmost music venue, The Orange Peel. The unique sound bursting from the wall of amps located on the venue’s stage was coming from none other than the aggressive indie band Sleigh Bells.

The Brooklyn band featuring singer Alexis Krauss and guitarist Derek Miller played with a vengeance as they performed what can only be classified as an explosion of loud garage rock sounds laced with classic horror movie shrieks and spiked with a rebellious punk attitude.

After playing six songs including “Crown on The Ground,” “Kids” and the haunting vocals of one of the few slow songs in the group’s catalogue, “End of the Line,” the duo took its first break of the night as Krauss welcomed the crowd and said, “This next song is a dance song, so I want to see you dance!” As the crowd responded with a thunderous ovation the band instantly began to play “Born to Lose.” With these words acting as an accelerant to the crowd’s already fiery energy, the Orange Peel’s floor was pulsing with dance.

After the band played several more songs including “Leader of the Pack,” “Tell ’Em,” and their latest hit “Comeback Kid,” it became clear this audience’s energy would not fizzle out and neither would the band. While running from side to side on the stage, the duo (and touring second guitarist Jason Boyer) played with full intensity, making it easy to forget the colossal sound was originating from only three people and no drummer.

At one point, the duo dedicated a song to opening act Arab Music, an electronic music DJ who puts his own twist on popular mixes. Sleigh Bells also played “Infinity Guitar” and their most popular song “Rill Rill.” With fans singing along, the song was on its way to becoming one of the show’s highlights until a fight broke out in the audience during the middle of the song’s chorus. Not wanting to create a bad experience for fans not involved, Krauss interrupted the song to point out the scuffle to security guards and to personally kick out the fight’s instigator. She then assured the audience that the occurrence would not ruin the night and went on to finish the song. The band then left the stage.

Fearing Sleigh Bells would not return, ear-splitting applause erupted from the crowd. The band returned shortly after for an encore with a level of energy that seemed to climb to an even higher level. While playing “Never say Die,” “Riot Rhythm” and “A/B Machines,” Krauss stage-dived, crowd-surfed and even tossed a microphone stand in the crowd while inviting the audience to be her “backup singers for the night.” After all of that, the band finished its set with feedback from a screaming guitar.

When It seemed as if the show had come to an end, both Miller (the band’s founding guitarist and songwriter) and Boyer left the stage. Many fans feared the show was over until Krauss, standing on stage alone, said “I believe that I owe you guys a chorus.” With those words she began to sing an a capella version of “Rill Rill” to make up for the song’s untimely end earlier that night. Fans slowly began to accompany her and soon enough everyone in the venue was singing. After the song’s final lyrics, she thanked the audience one last time and left the stage — ending the show and also the vibrations that racked The Orange Peel.