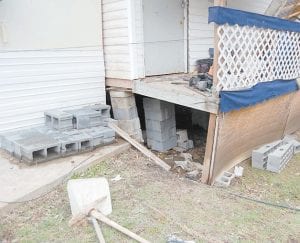 This outbuilding near the homes of Gillis Halcomb and Junior Boggs is in danger of collapsing. The federal Office of Surface Mining has declared the Craft’s Colly site an emergency. (Photo by Sally Barto)

The Office of Surface Mining in Ashland will request that a mudslide in Craft’s Colly be declared an emergency.

Steve Rathbun, Appalachian team leader of the OSM in Ashland, said this week that a request will be made soon to the federal reclamation program division of the OSM regional office in Pittsburgh, Penn. In the meantime, Rathbum said his office is working on an abatement plan to stabilize two areas near the residences of Gillis Halcomb and Junior Boggs.

Rathbun said preliminary investigation indicates that some mine drainage coming out approximately at the elevation of the road located above Halcomb’s residence is the cause of a mudslide. He said water is “saturating the area above and below causing the unstable condition.”

Halcomb said the land behind his mobile home is sliding into his storage building and he is worried about his home.

“It’s knocked my building off the blocks three times,” said Halcomb. “The whole mountain is sliding on me. The only thing that is holding it is the power pole.”

Halcomb said a water line was placed near a road above his property at Craft’s Colly and he noticed water pouring into his yard during the summer. Halcomb said the water line burst and his neighbors don’t have water coming to their residence any more.

Rathum said the broken water line is an influence to the amount of water that is saturating, but the mine drainage appears to be the cause of the problem.

“It just cracked open,” said Halcomb. “It has just been a mess. I had a nice place before this started.”