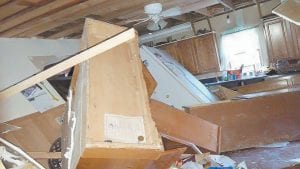 The remains of the kitchen of the Adams home shows the power of the mudslide that came down the mountain. (Photo courtesy of the Adams family)

When loud thumping sounds awoke District Four Magistrate Keith Adams around 5 a.m. on March 5, he was hoping dogs were chasing cats on a lumber pile.

“ It sounded like somebody stomping their foot on the floor,” said Adams, of Blacksmith Drive in the community of Letcher.

After he saw his dogs lying outside as they normally would, he knew the popping and cracking noises that also woke up his stepdaughter,

Katlyn Jent, were being made by something else.

“I opened the back door and there was a tree,” said Adams, who told Jent to awaken her mother and the Adamses’ eight-year-old grandson Hayden. “The noise was the tree limbs hitting the tin roof. After that it was all a big frenzy.”

Adams’s wife, Diane, told Jent to get in her car and take Hayden with her.

Adams tried to move as many vehicles as he could away from the two-and a-half-story house before a mudslide knocked the house off of its foundation. 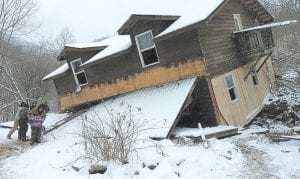 HOME IN RUINS — The home of District Four Letcher County Magistrate Keith Adams was destroyed by a mudslide during heavy rains last week. Adams and his wife, Diane, are facing the task of having to rebuild the home without any help from the insurance company that wrote their homeowner’s policy. (Photo courtesy the Adams family)

“Fifteen minutes later, the house was off the blocks,” he said.

Adams watched as the mud also pushed a backhoe, which was spared from being destroyed.

A friend’s truck parked near the house is buried somewhere in the basement.

“We never have found it,” Adams said.

Diane Adams’s grandmother’s sewing machine with a foot pedal is lodged among blocks in the basement. A washer, dryer, deep freezer, tools, chainsaws, woodburning tools and antiques are also in the basement. A dump truck, a monster truck, all-terrain vehicles and motorcycles were also destroyed.

The couch that Keith and Hayden Adams were sleeping on before the mudslide was left touching the ceiling.

“I just thank God that Keith got up,” Mrs. Adams said.

The first floor, which consisted of the living room, kitchen, two bedrooms, bathroom and a hallway, is demolished.

“All that is folded back and under like an envelope,” said Keith Adams.

Keith Adams purchased the property nearly 20 years ago and built a majority of the house himself in 1997.

“I built it exactly the way I wanted it,” said Adams, who recently put a new tin roof on the house.

Adams said he had contacted Division of Abandoned Mine Lands (AML) about 18 years ago to report water coming out of the bank near a mountain located behind his house. He said an AML employee came to his property and told him the water wasn’t an AML issue.

Adams never thought his house would be destroyed by a mudslide.

“Water never got muddier or worse,” he said. “It would always dry up. It had trees growing all over it.”

Mrs. Adams doesn’t know what her family is going to do. For now, they are staying with husband’s family.

One contractor said the ruins would take a year and a half to clean up, said Keith Adams.

The Adams family is waiting for a representative with Federal Emergency Management Agency (FEMA) to look at the site. Until then Adams said he has been told not to move the debris. The mudslide is blocking a road leading to three houses and Keith Adams is concerned for his neighbors who can’t get out.

As more rain falls, he predicts the house will continue to move.

“I don’t think that house is done,” Adams said. “I think it is going to roll all the way to the creek.”

The Adamses are overwhelmed by the amount of community support they have received since March 5.

“It’s just awesome and heartwarming,” said Diane Adams. “There is no way to explain how much love we feel from the community.”

Family and friends helped them salvage clothes, photos and other items from the top level of their home. A family member even found Hayden’s pet turtle, Mr. T, and the family’s seven-week old puppy.

“People have risked their lives for us,” said Diane Adams.

The Adamses have also been offered places to stay.

“They have overwhelmed me with calls, food, money,” said Keith Adams. “I think that is the greatest thing ever was. It is just unreal.”

Chelsea Holbrook created an account called “Give Back to Keith and Diane” on www.gofundme.com to help raise money for the Adamses. As of Tuesday afternoon, $4,215 has been raised.

“We are so thankful for our community and the outpouring of love and support,” said Diane Adams.