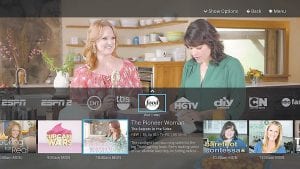 This image provided by Sling TV shows a view of the network miniguide on the Sling TV app. The Sling TV service is aimed at people who have dropped cable or satellite service or never had it. (AP Photo/Sling TV)

Satellite TV provider Dish Network made a splash this month when it unveiled an online alternative with fewer channels and a lower price tag than its regular service. The Sling TV option is aimed at people who have dropped their cable or satellite packages or never had either.

Based on a few days of viewing, Sling TV comes across as a good stopgap for those who don’t already pay for cable or satellite — but it’s not compelling enough for most people to cut the cord. And that’s the point: Dish wants to win over the pay-TV holdouts without cutting into its existing customer base.

This week, Sling TV started opening the service to those who had requested invites. A full launch is expected in two weeks.

The package is cheap compared with cable and satellite packages that typically cost $50 to $100 per month (Dish’s average is $85). Sling TV’s base package costs $20 a month and comes with 11 channels from Disney, Turner and Scripps. Two add-on packages — for news and kids — cost $5 each and offer another nine channels between them. A sports add-on is coming. These costs add up, but you pay only for what you want, unlike traditional pay-TV bundles.

The gem of Sling TV is ESPN, which all subscribers get. It’s a rare opportunity to get live sports, including many baseball and college football games, without a cable or satellite subscription — though NFL games will be blocked on mobile devices because Verizon has those rights.

ESPN alone won’t satisfy many sports fans, though. For instance, baseball games are often on Fox or regional sports networks unavailable on Sling TV. Sling TV will have March Madness basketball on TNT and TBS, but not TruTV and CBS.

Sling TV lacks all over-theair networks, including Disneyowned ABC. Also missing: NBCUniversal channels such as CNBC and Bravo, along with AMC, the channel behind “Mad Men” and “The Walking Dead.” There’s no 24- hour weather channel to monitor this week’s blizzard.

But I was able to watch Sunday’s Screen Actors Guild Awards. That was on both TNT and TBS.

One big plus: There’s no equipment, so it’s easy to sign up just for a month at a time when there’s a particular show you want to watch.

The service is initially available on Apple and Android mobile devices and the Roku 3 streaming device, though Sling TV plans to expand that to other streaming players, Internet-connected TVs and Mac and Windows computers.

Browse through what’s on by scrolling through the channel list and program guide at the bottom of the screen. Click on a show or “Watch” to switch channels. You can watch on only one device at a time. Sling TV is designed for individuals, not households whose members watch different shows at once. You can watch while traveling, but only in the U.S.

You can see what shows are coming over the next several days, but you can’t set up reminder notifications.

Here’s the weakest part of Sling TV: There’s no ability to record shows for later viewing.

For Scripps channels, you can watch what was on over the past three days. For Bloomberg TV, Baby TV and Duck TV, you can go back eight days. You get DVRlike controls to pause, rewind or forward — including a 30-second skip button for commercials.

But there’s no archive if you prefer to record entire seasons for binge viewing. And for Turner and Disney, including ABC Family and ESPN, you have to watch everything live. You can’t even pause. These restrictions are based on deals that Dish was able to negotiate with the channels.

Sling TV is aiming to offer older content on demand through the channels’ apps, but for now, only WatchESPN is set to be available when Sling TV launches.

I like Sling TV’s search tools to find content across channels, but it excludes upcoming shows. You can rent movies, too, though not directly from the iPhone or iPad app, as Apple would take a cut of sales. Sling TV also still needs true recordings and reminders.

I’m sure the service will get better, but the apps feel primitive for now.

Yes, $20 a month is a bargain. It gets cord-cutters like me some live sports and news, along with shows I’d normally have to wait several months to appear on Netfl ix. But if Sling TV wants to attract the younger “cord-nevers” who are used to watching everything online, it needs to offer capabilities they are accustomed to having online.