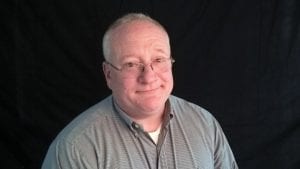 Bert Slone plans to hit the ground running when he takes over as Letcher County Jailer on January 7.

Slone, a 24-year veteran police officer, deputy sheriff and school resource officer for the Letcher County School District, said he will be keeping a lot of things the same in the jail, but will be resuming services that had to be canceled because of overcrowding, and adding new services for inmates.

“One of the things that happened is the (inmate) population went down, so that will help a lot,” Slone said last week, sitting in the lobby of the jail, where he has been spending time to learn everything he can before taking office.

Slone was unopposed in the November election. When he talked to The Mountain Eagle in May after winning the primary election, the jail had 143 inmates in a facility intended for 54. That number is now below 100, still overcrowded, but far below its peak population. Most of the change has been in state prisoners being transferred other places.

Slone said that reduction in population will allow him to shuffle cells and resume programs current jailer Don McCall had to cancel when a multipurpose room was converted to a dormatory to handle the extra prisoners.

“I’ve talked to a lot of organizations about programs in the jail. One of the organizations I’ve talked to is GED (the Southeast Kentucky Community and Technical College adult education program),” Slone said. “Don has done that in the past, and I’m just going to resume these.”

Slone said he also plans to restart a Narcotics Anonymous group in the jail and allow church services. He said he is looking at buying an 18-passenger bus to transport inmates and equipment to work release projects to pick up trash and cut weeds, and plans to offer work release for female inmates, who currently don’t work outside the jail.

Slone said he also wants to offer vocational training for inmates, if he can find enough money to buy the equipment.

“One of the things I’d like to get is a concrete buffer and train them to do that,” Slone said.

If he’s able to afford the purchase, he said he will have inmates remove the industrial floor tile in the jail and buff the concrete underneath to learn to use the equipment.

Buffed concrete is a smooth, shiny surface used in many large retail stores.

“We might be able to offer that to other county buildings as well,” Slone said.

He also wants to buy commercial washers and dryers and train inmates in industrial laundry service.

Slone said he hopes to offer internships in corrections to criminal justice students at Southeast Kentucky Community and Technical College. He said he cannot use the students as guards because of legal restrictions, but there are jobs they could do to help them find out if they’re suited for their chosen field of study.

“ That’ll either make them love it, or run like heck,” Slone laughed.

Slone said his brother Brian Slone, currently chief deputy under McCall, will continue in that position with Angie Fields assisting on the administrative side of the jail. Both are already employed there. Ernie Ison, another longtime deputy jailer, will be a supervisor and in charge of emergency management at the jail.

Slone said one employee he will miss is Deputy Ben Fields, a current supervisor who is leaving the jail to work as bailiff in Letcher District Court.