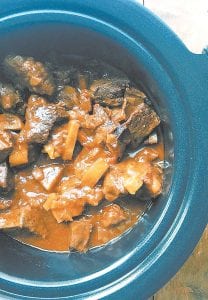 This photo shows barbecue beer beef stew in New York. This dish is from a recipe by Katie Workman. (Katie Workman via AP)

Let’s just start by saying that the words beef, beer and barbecue in a recipe title don’t make my husband sad.

When browning beef for a stew (whether you’re making it in a slow cooker, or a regular old pot or Dutch oven), it’s less important to get all the sides of the cubes of beef barely browned than it is to get a couple of sides nicely caramelized. Getting all six sides of a cube-ish piece of meat is a bit painstaking, and I’m absolving you from the task.

I actually read about a cool browning technique recently that helps if you are making a large amount of stew. Instead of browning all of the beef that’s been cut into small pieces, just buy the stew meat in a whole piece and cut it into steaks, or buy the meat in steak form. Heat a little oil in a pan until it’s quite hot and then sear the steaks on both sides, until nicely browned. Then cut the meat into 1 1/2-inch pieces. A nice deep browning on a couple of sides trumps barely browning on multiple sides.

If you didn’t have time to brown the beef at all, you would still end up with a flavorful beef stew, but it’s really worth it.

Parsnips look like pale carrots, beige in color, with a wider bottom near the root. They have a wonderful nutty sweetness. Look for smooth, hard parsnips with no sprouting. You could also use all carrots, or mix in potatoes or other root vegetables instead.

Season the beef evenly with
salt, pepper and the garlic powder.
Heat the oil in a large pan over
medium high heat. Working in
batches, brown the meat until it is
browned, about 8 minutes for each
batch. Don’t crowd the beef cubes
in the pan. Set the meat aside.
Pour off all but 2 teaspoons of
fat from the pan and add the onions. Sauté them for 3 minutes, until lightly browned, and add them
to the slow cooker. In the slow
cooker, mix together the barbecue
sauce, beef broth, beer, honey and
mustard. Add the parsnips, carrots and browned beef to the slow
cooker and stir to combine.
Cook on low for six to eight
hours, until the meat is tender.
When the stew is ready, prepare
the egg noodles according to package directions. Serve the stew hot
with noodles.

.
Katie Workman has written two
cookbooks focused on easy, familyfriendly cooking, “Dinner Solved!”
and “The Mom 100 Cookbook.” She
blogs at www.themom100.
com/about-katie-workman. She
can be reached at Katie@themom100.com.