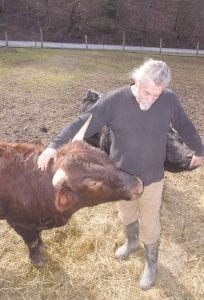 Tim Sanders pets two of his Dexter cattle near his house at Indian Creek. The cows are a “Heritage breed” that originated in Ireland. (Photo by Sam Adams)

Tim Sanders spent 20 years in the Arizona desert before he wandered home to the lush Kentucky mountains and settled into retirement on his grandparents’ farm that he bought from the heirs.

“I didn’t intend to start a business when I came back; I just intended to be self sufficient,” Sanders said.

Now, going on four years since he returned to Indian Creek from a career as an emergency management director on the Gila River Indian Community south of Phoenix, Sanders is working from early morning to late at night, tending to a farm filled with livestock breeds that may be disappearing from the planet. And he’s introducing 21st century Appalachia to 19th century Appalachian food.

“Everything I’ve got here is a heritage breed, listed by the Livestock Conservancy,” said Sanders, reaching across the fence to rub the nose of a Dexter bull sauntering up to the wire to be petted.

Dexters are Irish-bred cattle, Sanders explained. They’re smaller than a lot of American cattle, hairier, and both the bulls and heifers have horns. They grow slower than cattle that are commercially bred, Sanders said, making them unattractive to commercial farms that look for fast growing animals that can be sent to market quickly. These cattle’s slower growth makes for a finer meat. A “premium, gourmet meat,” Sander said.

They’re also rugged. He recounted a tale of one heifer dropping a calf as it grazed in the field. He didn’t notice until a visitor saw her leading the calf into the woods and out of the sun.

“Just loved her to death,” Sanders said, shaking his head.

These breeds were brought to the new world, or bred here, 100 to 200 years ago. They were pushed out by designer livestock bred to grow fast and fat, or to have no horns to hook their handlers. Cattle without horns are called “polled.” He’s back-breeding some cows to get rid of genes introduced by that selected breeding. One of his heifers is pure Dexter, but the rest are still partly hybrid.

“One heifer is a legacy with no polled genes,” he said, pointing to pregnant cow in the field in front of his house.

Sanders said he just likes the idea of knowing where his food comes from, though he’s not one to rant against “GMOs,” or genetically modified organisms. The farm, located near the community of Democrat off KY Route 7, also provides some income, but it’s also an opportunity to show people that you can farm mountainsides, and you can make money doing it. People here, he said, have to get out of the mindset that they have to go the grocery store.

“My papaw had all these hills cleared, and he raised corn and beans and taters, and raised nine kids,” Sanders said.

Sanders lived on Indian Creek until he was 13 years old, when his dad was laid off from the mines and saw the writing on the wall for coal. They moved, and Sanders mostly forgot about farming until he came back. Now he looks at the economy, at the brood sow with her six piglets, and the walk-in freezer full of USDA certified, vacuum-packed gourmet meats and thinks maybe people here need to remember their agricultural heritage.

“There was an industry here before coal,” he said. “I’d like to see some agricultural diversification around here, and we’re missing the boat if that doesn’t happen.”

Sanders is focusing on meat right now, but he’s thinking ahead to spring time and planting. He lets the pen full of half-grown pigs loose to run through next season’s garden and turn up and fertilize the soil that by summer will be producing tomatoes, beans, and other vegetables to sell at the farmers market in Whitesburg. He’s got maple trees waiting to be tapped next winter. And he’s got plans for a habitat enhancement project to clean out invasive species on the hillside that are “so prolific, they’ll crowd out the oaks and the hickories.”

He’s going to fence that hillside soon, and turn the pigs loose among the mast trees just like early Appalachian settlers did when they first brought the Tamworths here from England in the early 1800s.