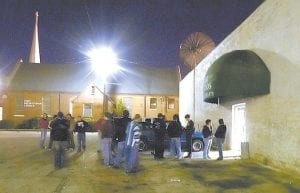 In this file photo, a crowd began to gather outside of the Muscle Shoals Music Hall, in Sheffield, Ala. The small northern Alabama music studio where The Rolling Stones, Cher, and other stars recorded their hit songs is turning 50 this year. Muscle Shoals Sound Studios will host an April 27 celebration of the milestone. (The Times Daily via AP)

A small northern Alabama music studio where The Rolling Stones, Cher, and other stars recorded their hit songs is turning 50 this year.

Muscle Shoals Sound Studios will host an April 27 celebration of the milestone in Sheffield, Alabama.

David Hood will perform as part of a Muscle Shoals All- Stars revue, fronted by singer Carla Russell, Al.com reported . Hood is one of the studio’s co-founders and the bassist for prolific session musicians Muscle Shoals Rhythm Section, also known as The Swampers.

The Swampers opened Muscle Shoals Sound in 1969, after backing R&B stars such as Wilson Pickett and Etta James at nearby FAME Studios.

“It seems like a blink of an eye, really,” Hood told the Alabama news site. “It doesn’t seem possible that it’s been 50 years.”

Hood and fellow Swampers musicians Jimmy Johnson, Roger Hawkins and Barry Beckett recorded much of their work at the Sheffield building — formerly the home of a coffin factory.

In 1978, they relocated the studio to a former Naval Reserve Building along the Tennessee River. That’s where Bob Dylan recorded his 1979 “Slow Train Coming” album; and his 1980 “Saved” album.

Cher was among the first artists the Muscle Shoals Rhythm Section worked with at the original studio. Her resulting album, released in June 1969, was titled “3614 Jackson Highway” after Muscle Shoals Sound’s address in Sheffield. The address was superimposed on the album’s cover photo, Al.com reported .

The studio scored a hit with soul singer R. B. Greaves’s song “Take a Letter Maria,” released in September 1969.

Songs of the 1960s and ‘70s recorded at the Sheffield location also included:

— The Staple Singers’ recordings of “I’ll Take You There” and “Respect Yourself.”

Hood is continuing to record music at Muscle Shoals Sound. In an interview with Al.com, he said it still feels good making music there.

“I play live for events and different shows and things like but I much prefer the studio,” he said. “I like to sit in the chair and go for the sound, and let everybody else do their dancing.”