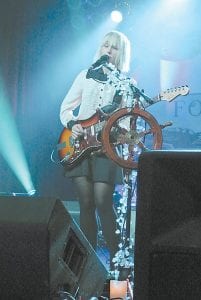 The Joy Formidable’s Ritzy Bryan performed at The Orange Peel.

On this night there was only a small number of people waiting outside Asheville, North Carolina’s Orange Peel Social Aid and Pleasure Club. They were there to see The Joy Formidable, a North Wales band formed in 2007 by childhood friends Ritzy Bryan (lead vocal and guitar), Rhydian Dafydd (bass guitar), and Matt Thomas (drums).

Though the line did not stretch through the long streets of downtown Asheville on this Sunday night (March 25), it was made up of fans who would soon witness a very intimate and equally entertaining performance by the trio as well as two impressive opening acts.

The first band to hit the stage was Brooklyn’s Exitmusic, whose sultry, deep-sounding female vocals paired with their long guitar jams were the perfect start to the evening’s lineup. After Exitmusic left the stage, a band that has been gaining buzz in North America lately, A Place to Bury Strangers, started their set. Their European sound matched with a great light show left the crowd wanting more.

After the opening bands finished, stage hands began to pull the black covers off the equipment that had been stored near the back of the stage. When the mysterious covers were removed, several stage props were revealed, including a 10-foot-tall lighthouse, fishermen’s nets, candles, and The Joy Formidable’s instruments, including their signature gong. Eventually the stage was heavily decorated and the lights were turned down. When the room grew dark, a light from the lighthouse began to shine and the sound of waves crashing and seagulls greeted the band members as they energetically walked on stage. As soon as they took their places, the familiar guitar riffs of their latest single, “A Heavy Abacus,” overpowered the ocean sound effects, signaling the start of the show.

The trio played with full force for the entire 12-song set that included songs such as “Cradle,” “Austere,” and “Endtapes.” It soon became very clear just how talented lead singer Ritzy Bryan is as she managed to sing every song and shred her guitar without missing a beat. Towards the end of the set, the band took some time to talk about an album they had worked on this winter. This discussion drove the fans crazy with anticipation for the release of the record tentatively set for later this year. After seeing the crowd’s reaction, the group decided to play a new song during the encore. This song, “Silent Treatment,” made it clear the new record will be one to rival the last.

Soon after, the crowd grew silent as a harpist stepped on stage and started plucking the notes to a familiar tune, the band’s most successful single “Whirring”. When the high-energy band joined the peaceful sounds of the harpist a brilliant contrast was created that pleased the crowd who began singing and clapping in appreciation.

When the group came to the song’s final riffs they put the gong (mentioned earlier) to use when Bryan hit the percussion instrument vigorously with her guitar as the rest of the band finished the song, a sequence which left the crowd in amazement.

Even though the venue was not sold out or heavily crowded, the people that were there were glad that they had made it to such an incredible show.

•“A Heavy Abacus” — The Joy Formidable

•“ The Ever Changing Spectrum Is A Lie” — The Joy Formidable

•“I Know I’ll See You” — A Place To Bury Strangers

Cassidy and Kennedy Breeding are near the end of their freshman year at Letcher County Central High School.