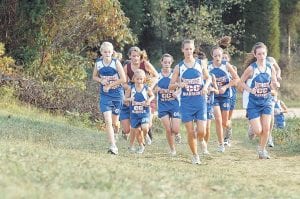 At 4-foot tall and a mere 53 pounds, fifth-grader Jill Collier hardly stand out in a crowd of other students at Somerset’s Oak Hill Elementary School.

But placed on a cross country course, Collier stands above the rest with her uncanny knack for wining races. Most of her young competitors see her for a brief moment on the starting line. But after the race starts, Collier quickly distances herself from the rest of the pack.

Collier is regarded as one of the top female elementary runners in Kentucky. Around G.E. Field she is simply known as “unbeaten.”

As a matter of fact, the 10-yearold runner has not been defeated at G.E. Field at any distance or any level.

Last year in the Pulaski County Invitational, Collier defeated her mentor, Emily Belwood, in the girls 2,000-meter race. At that time, Belwood was the defending elementary state champion.

Before her Pulaski Invitational win, Collier ran away from the Southern Harrier Classic middle school field by winning the race by nearly 300 meters. 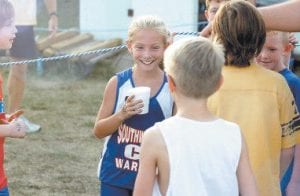 Jill Collier was all smiles as she took a break from running. She is a granddaugther of Wanda Collier of Partridge and the late Roger Collier, Millie Quillen of Somerset, and Ernie Huff of Somerset. (Photo by Steve Cornelius)

Keeping her G.E. Field winning streak alive, Collier moved up to the varsity level for a day and won the (Pulaski) Southwestern All-Comers meet earlier this spring.

“Jill is talented enough to run at the varsity level right now,” Pulaski Southwestern High School coach Rob Belwood said. “But we feel she is better served running with kids her own age.”

However, Collier was given a varsity uniform and has ran as a varsity runner in a couple of the smaller meets this season.

“She was so happy when she first got that blue varsity uniform,” said her father Jeff, a former crosscounty star at Whitesburg High School. “Her mom had to do a lot of alterations on the uniform to even make it come close to fitting her. She had to take the shirt up from the bottom, on the side and around the shoulders.”

Collier is not only a standout on the cross country course, but she is a standout in the classroom as well.

“Jill is the President of the school’s Beta Club and she is a straight-A student,” Oak Hill Elementary principal Jane Jones said. “She is probably one of the shortest students in our school, but she stands out with her hard work in the classroom and on the athletic field.”

“Jill has been beaten by just a couple of the state’s top middle school runners and she knows exactly who is her main competition in every race she runs,” Belwood explained. Collier began her running career as a first grader when she won her the first race she ran in at a summer G.E. Field “Fun Run.”

“I think after she won that first race, she really got interested in running,” her dad explained. “We have never pushed her to run and we have let her decide what she wants to do in sports.”

“She does gymnastics for fun, but she takes her running very serious,” he added. “She is like any other little girl who likes to play and goof off at times, but when she comes to cross country practice she is all business. But once practice is over with she is a little girl again.”

Collier began her G.E. Field dominance as a first and second grader and only competed in local meets during those first two years.

“By third grade, Jill felt that she needed to help out her elementary team in traveling meets,” her mother Jenny Collier said. Like Emily Belwood, Collier will have to wait two more years before she can start competing full-time on the Lady Warriors varsity team. But even as a seventh-grader, Collier will more than likely be a varsity front runner.

“Jill doesn’t talk a lot about her goals in cross country in the future years, but right now she enjoys running and the friends she has made on the cross country team,” her dad said. “She is a very fierce competitor by nature, but she never boasts or brags about her accomplishments.”

Instead, Jill Collier told her father, “I will let my legs do the talking.”

EDITOR’S NOTE: Jill Collier, a fifth-grade student in Somerset, is one of the top elementary school runners in the state though she is only four feet tall and weighs 53 pounds. She is the daughter of Jenny and Jeff Collier of Somerset. Her grandparents are Wanda Collier of Partridge and the late Roger Collier, Millie Quillen of Somerset, and Ernie Huff of Somerset. This news feature and a series of photographs taken of her by Somerset Commonwealth-Journal sports editor Steve Cornelius recently won first place in the Best Sports Picture Essay category of the Kentucky Press Association’s “Excellence in Kentucky Newspapers” contest.