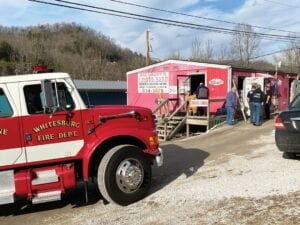 One of Whitesburg’s two liquor and wine stores caught fire on New Year’s Eve after an errant cigarette butt was apparently dropped outside the door by a customer, Whitesburg Fire Chief Perry Fowler said.

Big Daddy’s Liquor Barn on US 119 North had to be cleared of people and much of its product after strong winds pushed the fire from the wooden porch to a joist underneath the outside wall. Firefighters were able to dowse the blaze before it reached the inside of the building.

The owners were preparing to move from the trailer to a brand new, permanent, metal building just completed behind the store.

“Apparently a cigarette butt had found its way into some cardboard boxes that were stored under the entrance,” Fowler said. Strong winds kept the smoke pushed away and unnoticed while acting as a bellows to build the fire. Fowler said the fire burned a wooden support under the deck and a 2×6 joist.

Firefighters first thought the fire was out and were packing to leave when the wind fanned the flames again. They were able to stop it before it got to the inside of the wall.

“If it had, it would have been a good one,” Fowler said, noting the amount of alcohol inside the trailer.

The owners, Steven and Sandy Hammock, were inside when they noticed the smoke and called the fire department’s emergency line.

They and firefighters carried much of the inventory outside just in case, and Fowler said it would most likely just be moved into the new building. The trailer, he said, is being donated to a church.