Smallwood will also be candidate for full term on state court 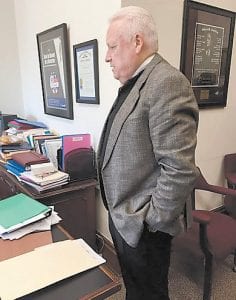 Whitesburg attorney Gene Smallwood has been appointed to fill a vacancy on the Kentucky Court of Appeals. He will be sworn into office on February 9.

Smallwood, 65, is a native of Jenkins, but grew up in Detroit, Mich. He received a Bachelor of Arts from the University of Michigan in 1973, and his Juris Doctor from the University of Kentucky in 1977. He was admitted to the Kentucky bar that same year, and to the United States Court of Appeals, District of Columbia and Sixth Circuits, and the Supreme Court of the United States in 1982.

Until his appointment, Smallwood has been in private practice in Whitesburg.

In addition to Smallwood, candidates of the office are:

• David Allen Barber, of Morehead. Barber is a former Court of Appeals judge, and a former Workers Compensation judge. He helped found Stumbo, Bowling and Barber in Prestonsburg, then joined the firm of Richardson, Barber and Williamson of Owingsville after leaving the Court of Appeals. The firm’s areas of practice are car, truck and motorcycle accidents, workrelated injuries, intentional tort, wills and probate.

• Donald Harold Combs, of Pikeville. Combs founded Combs and Combs with his father in 1983. His areas of practice are civil law, trial law, corporate law, gas and oil law, condemnation, coal law and other areas.