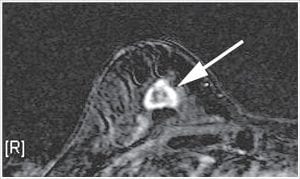 This image shows a right breast MRI from a 55-year-old woman with extreme breast density. The superimposed arrow points to a 2cm rapidly enhancing lesion which was later confirmed by biopsy to be invasive breast cancer. Doctors have successfully dropped the first “smart bomb” on breast cancer, using a drug to deliver a toxic payload to tumor cells while leaving healthy ones alone. (AP Photo/Duke University Department of Medicine)

Doctors have successfully dropped the first “smart bomb” on breast cancer, using a drug to deliver a toxic payload to tumor cells while leaving healthy ones alone.

In a key test involving nearly 1,000 women with very advanced disease, the experimental treatment extended by several months the time women lived without their cancer getting worse, doctors reported this week at a cancer conference in Chicago.

More importantly, the treatment seems likely to improve survival; it will take more time to know for sure. After two years, 65 percent of women who received it were still alive versus 47 percent of those in a comparison group given two standard cancer drugs.

That margin fell just short of the very strict criteria researchers set for stopping the study and declaring the new treatment a winner, and they hope the benefit becomes more clear with time. In fact, so many women on the new treatment are still alive that researchers cannot yet determine average survival for the group.

“The absolute difference is greater than one year in how long these people live,” said the study’s leader, Dr. Kimberly Blackwell of Duke University. “This is a major step forward.”

A warning to hopeful patients: the drug is still experimental, so not available yet. Its backers hope it can reach the market within a year.

The treatment builds on Herceptin, the first genetargeted therapy for breast cancer. It is used for about 20 percent of patients whose tumors overproduce a certain protein.

Researchers combined Herceptin with a chemotherapy so toxic that it can’t be given by itself, plus a chemical to keep the two linked until they reach a cancer cell where the poison can be released to kill it.

This double weapon, called T-DM1, is the “smart bomb,” although it’s actually not all that smart — Herceptin isn’t a homing device, just a substance that binds to breast cancer cells once it encounters them.

Doctors tested T-DM1 in 991 women with widely spread breast cancer that was getting worse despite treatment with chemotherapy and ordinary Herceptin. They were given either T-DM1 infusions every three weeks or infusions of Xeloda plus daily Tykerb pills — the only other treatments approved for such cases.

The median time until cancer got worse was nearly 10 months in the women given T-DM1 versus just over 6 months for the others. That is about the same magnitude of benefit initially seen with Herceptin, which later proved to improve overall survival, too, Blackwell said.

T-DM1 caused fewer side effects than the other drugs did. Some women on T-DM1 had signs of liver damage and low levels of factors that help blood clot, but most did not have the usual problems of chemotherapy.

“The data are pretty compelling,” said Dr. Michael Link, a pediatric cancer specialist at Stanford University who is president of the American Society of Clinical Oncology, the group that hosted the Chi- cago conference where the results were presented recently.

“It’s sort of a smart bomb kind of therapy, a poison delivered to the tumor … and not a lot of other collateral damage to other organs,” he said.

Denise Davis, 51, a customer service representative at a propane company, was diagnosed three years ago with breast cancer that had spread to her liver and bones. Since February of last year, the Lynchburg, Va., woman has made the two-hour trip to Duke in Durham, N.C., every three weeks to get infusions of T-DM1.

“I call it ‘Herceptinplus,’” she said. Scans every six weeks show “everything is still shrinking or stable,” she said. “Right now, I’m feeling pretty good about it. The only way I’d feel a little better is if it took care of everything, but I’ll take what I can get.”

Genentech, part of the Swiss company Roche, plans to seek approval later this year to sell the drug in Europe and the United States. Another company, ImmunoGen Inc., made the technology combining the drugs.

Genentech says the price of T-DM1 has not been determined. Herceptin costs more than $4,000 a month plus whatever doctors charge to infuse it. Herceptin’s U.S. patent doesn’t expire until 2019.