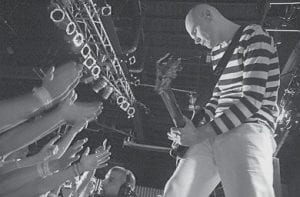 When the Smashing Pumpkins reunited after seven years to plot a U.S. concert series, the alternative rock band made a surprising choice for its first shows: a small club in the mountains of North Carolina.

The Orange Peel, a 942-capacity venue, is hosting the Grammy Award-winning band for a nine-show run that began Saturday in Asheville. Locals hope the concerts – the band’s first extended-stay performance in 13 years – puts this sleepy mountain town on the music map.

“It’s an automatic home run for Asheville,” said Mike Rangel, co-owner of the Asheville Brewing Co. brewpub and restaurant, just a few blocks from The Orange Peel. “It puts us up there with the big boys.”

More bands deny rather than accept invitations to play at the club, said Karen Ramshaw of Public Interest Projects, which owns and operates The Orange Peel. But the Smashing Pumpkins sought it out, said Tennessee based music promoter Ashley Capps, who helped coordinate the band’s U.S. return.

The shows are the biggest event in the club’s history.

“We started the discussions two or three months ago,” Capps told the Asheville Citizen-Times. “They were already interested in The Orange Peel at that point. It’s testimony to The Orange Peel, and to the Asheville community. The region has been so supportive of live music. Asheville is such a cool town.”

The Smashing Pumpkins sold millions of albums and won two Grammy Awards before breaking up in 2000. The band’s last socalled “residency” was a fourshow stint in Chicago in 1994, before the release of “Mellon Collie and the Infinite Sadness.”

Since beginning its return in May – reunited under frontman Billy Corgan and drummer Jimmy Chamberlin, with others to be announced – the band has performed more than a dozen shows across Europe. The Asheville shows are in front of the July release of the band’s new album “ZEITGEIST.”

About 8,500 tickets for the nine Asheville shows sold out in only five minutes – one day after sales crashed another ticket Web site.

Only about half the tickets went to North Carolinians, and about 20 percent of those went to Asheville residents, said Bryan Benson, a talent buyer with AC Entertainment, which works with Ticketmaster to track sales. Other tickets went to fans in the Northeast, Midwest and Canada.

“It’s a legendary band in a small setting,” said Cory Gates, 33, of Asheville, a longtime fan who saw the band play in New England in the mid-1990s. “I don’t know if you can get much better.”

Though the original tickets sold for $20, some are appearing on the Internet for several hundred dollars.

Organizers are clamping down on scalpers by forcing anyone who successfully ordered tickets online to bring the receipt, photo ID and the credit card used to the club box office. Concertgoers then get a wristband to access the club.

The Smashing Pumpkin plan another series of shows from July 22 to Aug. 1 at the historic Fillmore in San Francisco.