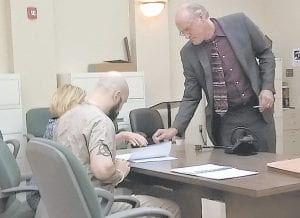 PLEADS GUILTY – Patrick Smith, accused in the New Years 2014 slaying of Michael Hogg in Whitesburg, pleaded guilty this week to facilitation to commit murder, and other charges. Pictured, Smith (seated) verifies his signatures on the plea agreement with his attorney, Tom Griffiths. (Photo by Sam Adams)

Patrick Smith, 31, of Greasy Creek in Pike County, shuffled into the Letcher Circuit Courtroom in shackles, his hands cuffed to a belt around his waist. He was still dressed in tan scrubs from the jail, his head shaven and a long, dark beard. Several tattoos adorned his arms.

Smith was accused along with James R. Huffman IV of stabbing Hogg to death on Hayes Street in Whitesburg, wounding Stacy Phillips and Christopher Puckett, and cutting the tires of Hogg’s Jeep and attempting to break out the windows, preventing Samantha Mullins from driving Hogg to the hospital. Both had faced complicity to murder and complicity to attempted murder charges, as well as charges of criminal mischief for damage to the Jeep. Smith was also accused of cleaning the blood from the knives used in the killing, and hiding them in his boot.

Smith sat quietly and seriously as Special Letcher Circuit Judge Kent Hendrickson asked whether he understood the rights he would be giving up by pleading guilty – the right to a speedy trial by a jury, the right to hold the prosecution responsible for presenting a fair and coherent case against him, and several others. Each time, Smith, a Marine veteran, sat straight up in his chair and answered, “Yes, Your Honor.”

Asked if he had taken any kind of drugs or alcohol that would prevent him reading or understanding his agreement, Smith answered “Absolutely not, your honor.”

His demeanor was in marked contrast to Huffman’s during his trial, during which there were occasional outbursts from a member of Huffman’s family, and the defendant and his attorneys argued with the prosecutor, and with the judge.

One by one on Tuesday, Hendrickson read the amended charges to Smith.

Criminal complicity to criminal mischief in the first degree. Guilty.

If Hendrickson chooses to sentence Smith according to the plea agreement, he will receive a sentence of 20 years in prison. The judge could choose to ignore the sentences offered by Commonwealth’s Attorney Edison Banks and sentence Smith to more or less than recommended. However, if he does sentence him to more time, Smith would have the opportunity to withdraw his guilty plea and go to trial.

Thomas Griffiths, Smith’s attorney for the past four years, said after the hearing that if anyone had asked him four years ago how the case would be determined, he would have told them there would be a full trial, but in the end he thought the guilty plea was the best outcome for everyone.

Smith, he said, helped Huffman and did “what he thought was right,” but has since come to know it was not.