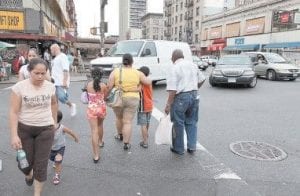 Men, women and children crossed a busy 181st Street along St. Nicholas Ave., near the border of the Washington Heights/ Fort George sections of Manhattan, on July 17 as trucks, cars and vans pack the streets in the New York neighborhood. Researchers for the first time have linked air pollution exposure before birth with lower IQ scores in childhood, bolstering evidence that smog may harm the developing brain. (AP Photo)

Researchers for the first time have linked air pollution exposure before birth with lower IQ scores in childhood, bolstering evidence that smog may harm the developing brain.

The results are in a study of 249 children of New York City women who wore backpack air monitors for 48 hours during the last few months of pregnancy. They lived in mostly low-income neighborhoods in northern Manhattan and the South Bronx. They had varying levels of exposure to typical kinds of urban air pollution, mostly from car, bus and truck exhaust.

At age 5, before starting school, the children were given IQ tests. Those exposed to the most pollution before birth scored on average four to five points lower than children with less exposure.

That’s a big enough difference that it could affect children’s performance in school, said Frederica Perera, the study’s lead author and director of the Columbia Center for Children’s Environmental Health.

Dr. Michael Msall, a University of Chicago pediatrician not involved in the research, said the study doesn’t mean that children living in congested cities “aren’t going to learn to read and write and spell.”

But it does suggest that you don’t have to live right next door to a belching factory to face pollution health risks, and that there may be more dangers from typical urban air pollution than previously thought, he said.

“We are learning more and more about low-dose exposure and how things we take for granted may not be a free ride,” he said.

While future research is needed to confirm the new results, the findings suggest exposure to air pollution before birth could have the same harmful effects on the developing brain as exposure to lead, said Patrick Breysse, an environmental health specialist at Johns Hopkins’ school of public health.

And along with other environmental harms and disadvantages low-income children are exposed to, it could help explain why they often do worse academically than children from wealthier families, Breysse said.

“It’s a profound observation,” he said. “This paper is going to open a lot of eyes.”

The study in the August edition of Pediatrics was released Monday.

In earlier research, involving some of the same children and others, Perera linked prenatal exposure to air pollution with genetic abnormalities at birth that could increase risks for cancer; smaller newborn head size and reduced birth weight. Her research team also has linked it with developmental delays at age 3 and with children’s asthma.

The researchers studied pollutants that can cross the placenta and are known scientifically as polycyclic aromatic hydrocarbons. Main sources include vehicle exhaust and factory emissions. Tobacco smoke is another source, but mothers in the study were nonsmokers.

A total of 140 study children, 56 percent, were in the high exposure group. That means their mothers likely lived close to heavily congested streets, bus depots and other typical sources of city air pollution; the researchers are still examining data to confirm that, Perera said. The mothers were black or Dominican-American; the results likely apply to other groups, researchers said.

The researchers took into account other factors that could influence IQ, including secondhand smoke exposure, the home learning environment and air pollution exposure after birth, and still found a strong influence from prenatal exposure, Perera said.

Dr. Robert Geller, an Emory University pediatrician and toxicologist, said the study can’t completely rule out that pollution exposure during early childhood might have contributed. He also noted fewer mothers in the high exposure group had graduated from high school. While that might also have contributed to the high-dose children’s lower IQ scores, the study still provides compelling evidence implicating prenatal pollution exposure that should prompt additional studies, Geller said.

The researchers said they plan to continuing monitoring and testing the children to learn whether school performance is affected and if there are any additional long-term effects.