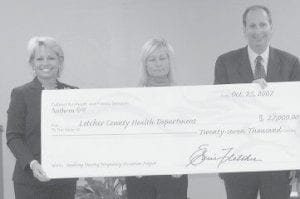 First Lady Glenna Fletcher (left) and Mark D. Birdwhistell, secretary of the Cabinet for Health and Family Services delivered a check for $27,000 to Lana Polly-Mullins.

Fletcher, who spoke at the Harry M. Caudill Memorial Library in Whitesburg on October 25, said the new program will consist of simple and evidencebased counseling to decrease smoking in pregnant women.

“The goal is that every pregnant woman that smokes will go to their local health department for services and will be identified, referred, counseled and case managed with the aim to assist them to quit smoking during their pregnancy. I think this will have a profound affect,” said Fletcher.

The one-year initiative, to begin in July 2008, is funded through a $245,000 grant from the Anthem Blue Cross and Blue Shield Foundation. The grant involves nine counties in eastern Kentucky where the number of pregnant smokers is high. The nine counties are Knott, Lee, Leslie, Letcher, Owsley, Perry, Wolfe, Knox and Whitley. 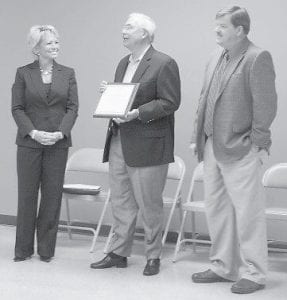 “We all know that smoking is not good for any of us, but it can have devastating effects on the lives of our newborns. By helping pregnant women stop smoking, we are saving babies’ lives and giving them a healthy start in life, reducing the number of low-birth weight babies and preterm births,” said Fletcher.

Fletcher said it will take a lot of education to help curb smoking among pregnant women.

The program in Letcher County is expected to reach about 500 women who smoke and receive Medicaid services through the local health department.

Also during Fletcher’s visit she presented the Letcher County Fiscal Court and the City of Whitesburg with an award for implementing a no-smoking ban that was imposed on July 1, 2006.

“We’ve seen the number of smoke-free ordinances across the state grow from zero to 14. And now they are all across Kentucky. This takes a tremendous amount of support from the leadership and citizens of the community. I applaud the work of the community for making Letcher County smoke free,” said Fletcher.

Letcher County Judge/Executive Jim Ward and Whitesburg Mayor James W. Craft accepted the Get Healthy Kentucky award of recognition of the diligence of the fiscal court and city council in making the county a healthier place.

“This award came long and hard,” said Craft. “As you all know, presently there is a move underfoot to undo that ordinance that was passed several years ago and to kind of leave this thing up to the people that own businesses. We’re thinking that it won’t pass because we have the support of our county/judge executive and of course these two magistrates sitting here (Codell Gibson and Archie Banks). So, let’s all keep it in place. Those of us who do smoke can always go outside and not offend anybody.”

“Baker Family Care is now able to do 60 to 70 percent of its prescriptions electronically. It’s really state of the art. They implemented an electronic medical records system that includes ePrescribing,” said Fletcher. “Its system interfaces with a community pharmacy in Neon but is also able to send electronic prescriptions to any pharmacy that accepts their clearinghouse.”

Fletcher said she and Gov. Ernie Fletcher have been “aggressively working to improve and change the health of Kentuckians through targeted initiatives that emphasize prevention.”

“Get Healthy Kentucky is changing people’s wellness mindset by emphasizing physical activity, nutrition and tobacco cessation and prevention. We’ve made such positive change by doing something very simple. We are looking at the big picture,” said Fletcher.

Fletcher said Kentucky has moved from 42nd to 39th in its overall health status.

“We’ve made fantastic progress in the last four years: reducing the smoking rates for teens and adults; creating newborn screening standards that will never be outdated, and making Medicaid the model for the nation and more importantly making it financially stable once again,” said Fletcher.

“Good health and wellness is a way of life for all ages and it’s never too late or too early to make improvements in your lifestyle,” said Fletcher.

Mark D. Birdwhistell, secretary of the Cabinet for Health and Family Services, informally announced a $500,000 grant for construction of a new health department. He said there will be a more formal announcement with a groundbreaking ceremony when all of the details are worked out.

“Apparently there was a funding in the last session of the General Assembly to assist in the legislative budget in construction of a new health department in this area,” said Birdwhistell.