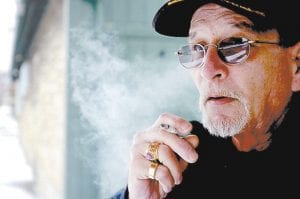 Gary Hilton is a bartender in Moline, Ill., one of many cities and counties which now ban smoking in the workplace. A new study says a similar smoking ban in Pueblo, Colorado has reduced the number of heart attacks there. Hilton was outside taking a break when this photo was taken. (AP Photo)

A smoking ban in one U.S. city led to a dramatic drop in heart attack hospitalizations within three years, a sign of just how serious a health threat secondhand smoke is, government researchers say.

The study, the longest-running of its kind, showed the rate of hospitalized cases dropped 41 percent in the three years after the ban of workplace smoking in Pueblo, Colorado, took effect. There was no such drop in two neighboring areas, and researchers believe it’s a clear sign the ban was responsible.

The study suggests that secondhand smoke may be a terrible and under-recognized cause of heart attack deaths in this country, said one of its authors, Terry Pechacek of the Atlanta-based U.S. Centers for Disease Control and Prevention.

At least eight earlier studies have linked smoking bans to decreased heart attacks, but none ran as long as three years. The new study looked at heart attack hospitalizations for three years following the July 1, 2003 enactment of Pueblo’s ban, and found declines as great or greater than those in earlier research.

“This study is very dramatic,” said Dr. Michael Thun, a researcher with the American Cancer Society.

“This is now the ninth study, so it is clear that smoke-free laws are one of the most effective and cost-effective to reduce heart attacks,” said Thun, who was not involved in the study.

Smoking bans are designed not only to cut smoking rates but also to reduce secondhand tobacco smoke. It is a widely recognized cause of lung cancer, but its effect on heart disease can be more immediate. It not only damages the lining of blood vessels, but also increases the kind of blood clotting that leads to heart attacks. Reducing exposure to smoke can quickly cut the risk of clotting, some experts said.

“You remove the final one or two links in the chain” of events leading to a heart attack, Thun said.

Secondhand smoke causes an estimated 46,000 heart disease deaths and about 3,000 lung cancer deaths among nonsmokers each year, according to statistics cited by the CDC.

In the new study, researchers reviewed hospital admissions for heart attacks in Pueblo. Patients were classified by postal codes. They then looked at the same data for two nearby areas that did not have bans — the area of Pueblo County outside the city and for El Paso County.

In Pueblo, the rate of heart attacks dropped from 257 per 100,000 people before the ban to 152 per 100,000 in the three years afterward. There were no significant changes in the two other areas.

“The need for protection from secondhand smoke in all workplaces and public places has never been clearer,” said Matthew Myers of the Campaign for Tobacco-Free Kids, in a prepared statement. He is president of the Washington, D.C.-based advocacy organization.

But the study had limitations: It assumed declines in the amount of secondhand smoke in Pueblo buildings after the ban, but did not try to measure that. The researchers also did not sort out which heart attack patients were smokers and which were not, so it’s unclear how much of the decline can be attributed to reduced secondhand smoke.

One academic argued there’s not enough evidence to conclude the smoking ban was the cause of Pueblo’s heart attack decline.

The decline could have had more to do with a general decline in smoking in Pueblo County, from about 26 percent in 2002- 2003 to less than 21 percent in 2004-2005. If there were stepped-up efforts to treat or prevent heart disease in the Pueblo area, that too could have played a role, said Dr. Michael Siegel, a professor of social and behavioral sciences at the Boston University School of Public Health.

“I don’t think it’s as clear as they’re making it out to be,” Siegel said.