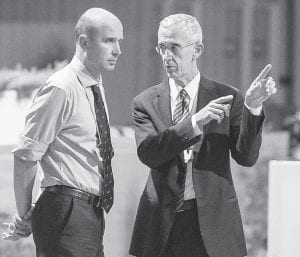 The smoldering debate over whether coal has a future in a lowcarbon world has flared up with new intensity in Warsaw, the site of this month’s annual United Nations negotiations toward a global climate treaty.

With world coal use growing at a staggering pace, top climate diplomats have used the global stage to take a much more aggressive stance against the coal industry. They are demanding that companies move quickly to leverage technology to capture and bury their planet-heating emissions or risk putting the world on a dangerous and irreversible path.

In a stern address to the World Coal Association on the sidelines of the summit, Christiana Figueres, head of the UN’s Climate Change Secretariat, made several demands of industry: leave “most existing reserves in the ground,” shut down the dirtiest coal-fired facilities and use carbon capture and storage (CCS) on “new plants, even the most efficient.”

Her bottom line is that world’s “carbon budget is half spent” at a time when the global expansion of coal is wiping out gains from clean energy. “The coal industry faces a business continuation risk that you can no longer afford to ignore,” Figueres said.

That message has been echoed in one speech after another, and report after report, by a panoply of major international organizations and institutes with interests in energy and climate policy. The focus on coal power during the two-week talks is because of the industry’s enormous global warming contribution. And it reflects how worried climate advocates are about the future—with nearly 1,200 coal plants on the drawing boards, mainly in developing economies.

UN Secretary General Ban Ki-moon declared at a news conference that coal and other fossil fuel industries “will have to make green and sustainable investment decisions that will keep them in business, and us within the bounds of 2 degrees Celsius,” the safe target at the heart of climate treaty deliberations. “They seem to be making a transition, but I have been urging them to make it faster,” he said.

The UN estimates that if nations stick to their current pledges for carbon reductions by 2020, emissions will overshoot the desired limit by about 18 percent. Recent reports project that the rise in average global temperatures could approach 4 degrees Celsius by century’s end.

Given plans to plow billions into new coal plants, many experts see no way to limit warming to a safe level without CCS — an expensive technology that industry says hasn’t been proven to work on a commercial basis.

In the United States, the Obama administration has proposed regulations that would force any new coal plant to be fitted with CCS technology, an attempt to establish a role for coal in the carbon-constrained economy. But the coal industry and its allies in Congress are trying to block the regulations by arguing that CCS is “not commercially viable.”

The World Coal Association, the industry group addressed by Figueres, had scheduled its own meeting in Warsaw to argue that coal has a place in a world struggling to lower emissions — though not necessarily through CCS, at least not right away.

The group said it’s enough to build modern coal plants that are more efficient and cleanerburning.

“If we were to raise the global average efficiency of coal plants from its current average of 33 percent up to 40 percent we could reduce global carbon emissions by more than 2 gigatons — that’s the equivalent of running the Kyoto Protocol three times over,” said Milton Catelin, head of the World Coal Association, in a speech responding to Figueres.

“Modern highly efficient plants are also a key step towards near zero emissions from coal because they can be built ready for the deployment of carbon capture and storage technology,” he said.

No Room in the Carbon Budget

Newly released data show why climate hawks think CCS is not an option, but an imperative.

A summary of global emission trends, published by the authoritative International Energy Agency, show that the rise in coal use in developing countries in the past 10 years was a critical factor in pushing carbon dioxide levels upward. “The fossil fuel mix changed signifi cantly in the last ten years, with a rapid growth of coal as the largest source of CO2 emissions,” it said.

With such an expansion of coal underway, a group of climate scientists declared that “the only way that coal plants can be part of a low-carbon future is for all new coal plants to include CCS from the outset.”

“There is no room in the remaining carbon budget for building new unabated coal power plants, even highly efficient ones, given their long lifetimes,” the scientists said. “Nor is there much room for upgrading existing coal plants with high-efficiency technologies, since they will consequently have even longer lifetimes.”

To bring emissions down enough to avoid the worst consequences of rising temperatures, a separate EIA report on CCS said carbon capture would have to provide one-sixth of the greenhouse gas reductions the world needs to make. The technology would have to remove a breathtaking 120 gigatons of CO2 from the world’s smokestacks.

That means a daunting pace for a technology that is moving only in fits and starts.

By 2020, the capture of CO2 would have to be demonstrated in at least 30 projects — meaning that every project now in advanced planning must be built, plus several more. By 2030, the technology’s use would have to be routine in power generation and other industries. By 2050, it would have to be used everywhere.

As Maria van der Hoeven, executive director of the IEA, said in a speech early this month, “as long as fossil fuels and carbon-intensive industries play dominant roles in our economies, there simply is no climate-friendly scenario in the long run without CCS.”

“The deployment of CCS absolutely needs to start happening beginning 2020,” she asserted.

‘It Is Not Going to Happen’

Such an extremely aggressive pace would have to overcome years of inertia that has seen many carbon capture projects fall by the wayside.

Karl Rose, director for policy at the World Energy Council, a consortium of thousands of institutions in more than 100 countries, said in a presentation in Warsaw that it was no simple matter for industries and governments to make the needed transition to carbon capture.

“We can force transitions now at a rapid speed, but it is going to cost you,” he added. “Do you want this?” After extensive discussions around the world, he said the council was pessimistic about CCS.

“We have come to the conclusion that it is not going to happen,” he said.

“We have not found in China nor in the U.S. nor in Europe anyone who is willing to invest and do CCS. And yet it is one of the crucial technologies which we have to make work one way or the other in order to decarbonize some of the coal which we cannot get out of the system in time.”

“If the world and the politicians fail” on CCS, Rose said, “then we will not have a very satisfying result.”