‘Snake Man’ reality TV show is on hold for now 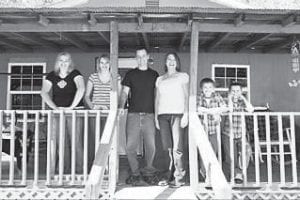 The Short family on porch of their home at Pine Creek.

If you tuned into Animal Planet to watch ”Snake Man of Appalachia” but couldn’t find it, the network’s officials say don’t panic, the show hasn’t been canceled.

“We want to put it on the best night to make sure it is seen by the most people,” said Hoffman. “I know it is frustrating. We actually love that show and it is doing well for us.”

The show premiered January 12 and depicts Short, of Pine Creek at Mayking, as an out-of-work coal miner struggling to find a job to provide for his wife, Reva, and their four children, Denishea, Wanda, and twins Jeremiah and Mackenzie. Verlin Short attends church services where snakes are handled and catches copperheads and rattlesnakes in eastern Kentucky and West Virginia.

“I love this show because the family is so real,” said Hoffman. “What we love about the Shorts is they are very honest and we feel like we are getting a glimpse of their lives.”

Hoffman particularly likes the relationship between Verlin and his wife. Reva Short isn’t fond of snakes, but supports her husband as he catches them and practices serpent handling.

“I think she kind of wishes he didn’t do it, but she loves him and they work it out,” said Hoffman. “It’s a relatable situation.”

“The animals are our way in,” said Hoffman. “We’re interested in both people and animals.”

Hoffman said highly popular shows such as Fox’s “American Idol” and The History Channel’s “Swamp People” have aired at the same time as “Snake Man of Appalachia” and cut into its audience. He also said February is also a big month for new shows to debut.

Hoffman said the show might air on a new day and time. Even though it may take a month or longer to secure a new airtime, Hoff- man said the final two episodes of “Snake Man of Appalachia” will eventually air on Animal Planet.

“It’s definitely going to be on soon,” said Hoffman. “We’re very pleased with the ratings.”

Hoffman said there still has been no decision made on the question of whether there will be a second season of “Snake Man of Appalachia.” He said the answer depends on whether there is a strong enough interest in the show.

Dan Sexton, executive producer of “Snake Man of Appalachia,” met Verlin Short in 2002 while producing a documentary about snake handling for the Travel Channel. Sexton, owner of Dan Sexton Media in Corte Madera, Calif., decided there is public interest in the religious ritual and wanted to further explore the topic as well as introduce the Short family to the world.

A film crew first shot footage of the Short family for the pilot episode in the spring of 2010. Animal Planet ordered five more episodes and the sevenperson film crew came back to Letcher County in the fall of 2010 to shoot the extra footage. At the time of filming, Denishea was 16, Wanda was 13, and twins Jeremiah and Mackenzie were eight.

“I think the family is happy,” said Hoffman. “They feel like they have been portrayed honestly. I think they have gotten some mixed responses from people.”